The rooster is calling. It’s only half past four. Going to bed early and getting up with the first indication of light is the lifestyle on a citrus farm. Vlou, our Beagle, lies still on his back snoring the mites out of the cushions of his bed and will refuse to get up earlier than half past six. 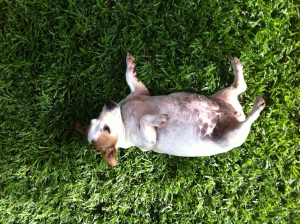 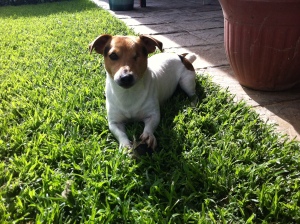 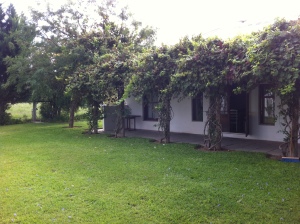 Our home is at Addo White House, situated in the middle of lucerne fields and citrus plantations about thirty kilometres from Kirkwood in the Eastern Cape of South Africa. We live in a spacious apartment in the main house, which is white with a corrugated iron roof, typical for this area. There is a nice garden with plenty space for Vlou to run around with his friends Sparky and Blacky, two Jack Russell Terriers. 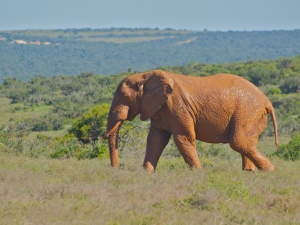 The last two months we took every opportunity to visit Addo Elephant Park, which is only a fifteen minutes drive away. With a flask hot coffee and picnic, we headed for the indigenous African wildlife, which has been reintroduced to Addo since the opening of the park in 1931. The park has subsequently been expanded to the surrounding areas and to the coast to include maritime mammals and birds. 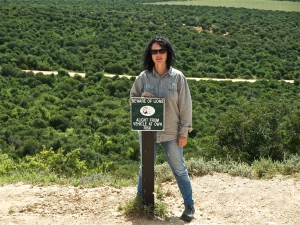 There are more than six hundred elephants in the park. It’s a pleasure to observe plentiful elephant families bathing at the waterhole, their faces expressing cheerful bliss. The mother elephants and aunts care for the tiny babies, which are slithering over the banks headlong into the muddy pool. Youngsters smash their trunk on to the water surface and tease their buddies cheerfully. Grown up giants role joyfully in the red muddy borders of the waterhole. Often a bull watches the spectacle from a distance. 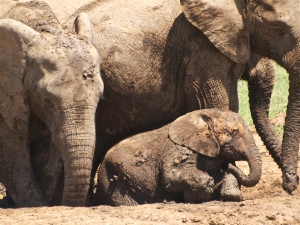 Warthogs are not bothered by the presence of the elephants and drink or bathe next to them. Only when playfully chased by a juvenile elephant, they run away just as far to be safe. They look very funny, when they run off with their little tails pointing into the air! Sometimes black backed jackals approach carefully to quench their thirst or wait till the elephants leave to get their share.
The landscape is dry because of lack of rain during the last few months. Therefore the waterhole is frequently visited by all kinds of animals. You’ve only to wait to see the thirsty beasts replace each other by the hours. In vicinity to the waterhole also bounteous water birds are to be found. Spread all over the park we saw mostly raptors like Goshawk and Forest Buzzard. The distinctive call of a fish eagle we heard only from far. 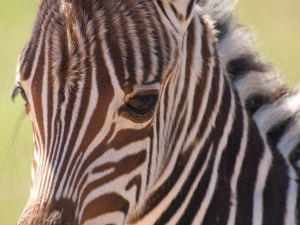 Most exciting was the sight of two cheetahs at a kill about two hundred meters away from us. To be able to see the only two newly introduced Cheetahs in the almost two thousand square kilometres large park was most exciting. I could slap myself for having forgotten our camera on that day! Therefore my son, Jessey, could sneak a picture of a caracal, when he was visiting us over Christmas. Just heading out of the bush moving away from our car, he looked back just at the right moment to get his pretty face with black ear tufts on the photo. 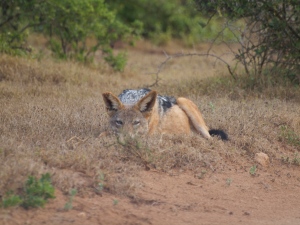 George got a glimpse of a lion behind a bush one day, while I was at home writing. There are eleven lions in total, but you are extremely lucky to see one. You are more likely to see buffalos. We discovered once a huge herd chewing away on the leaves of thorny bushes, which surrounded them. The buffalos often hide in the thicket, where it’s cooler as does the black rhino, which we didn’t encounter on our safari trips so far. They say that Hyenas have been newly introduced, too. 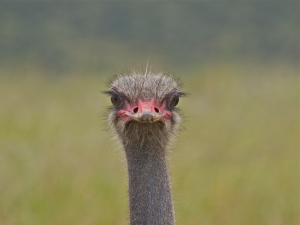 Yesterday a piercing green boom slang and half an hour later a meerkat (Suricate) crossed our path. I won’t neglect to mention the herds of antelopes we’ve seen like Hartebeest and Kudus, the Zebras and of course the amusing flightless dung beetles rolling elephant dung into balls. They are always worth to observe, especially when waiting for the more rare specious in the park.
After almost two months of country life we will leave tomorrow for Morgan’s Bay, which is not too far from East London, near to the mouth of the Kei River at the coast. What a bitch 😉