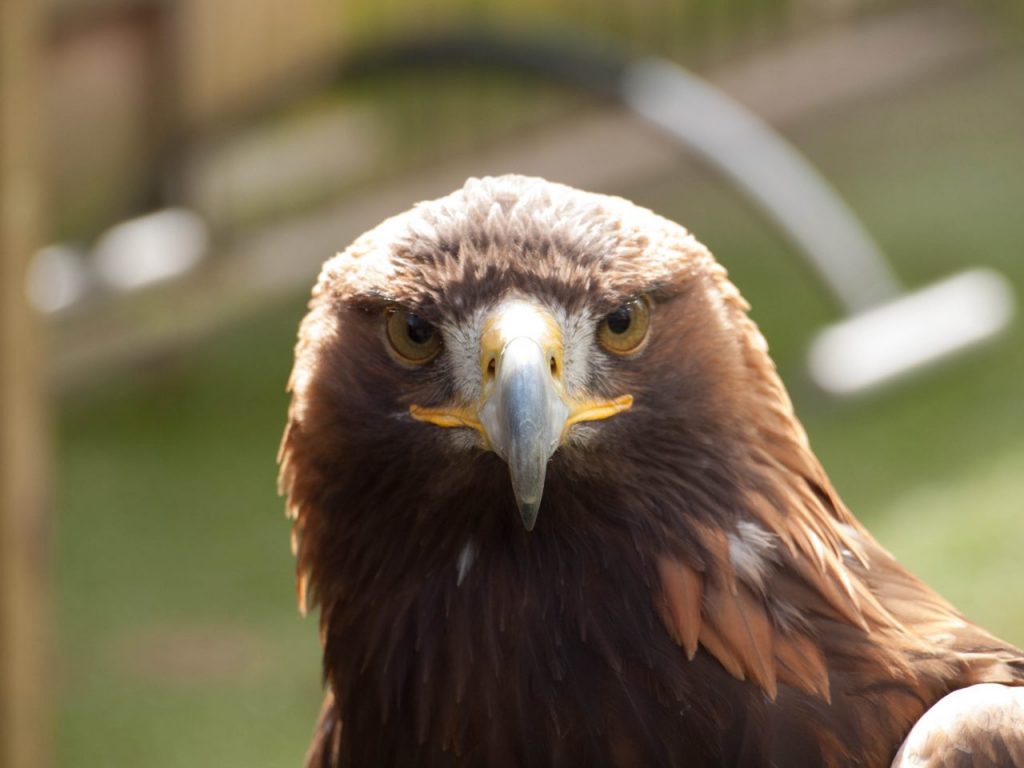 Eager to take off, the Golden Eagle flaps her imposing wings of about two meter wingspan as she spots another bird which appears only as a tiny speck in the sky to the humans limited-sight. But her attempts are futile as the rigid ties keep her firmly to the ground. She has to bear a heavy lot for a good cause and will most probably stay for ever on the grounds of  Loch Lomond Bird Of Prey Centre. 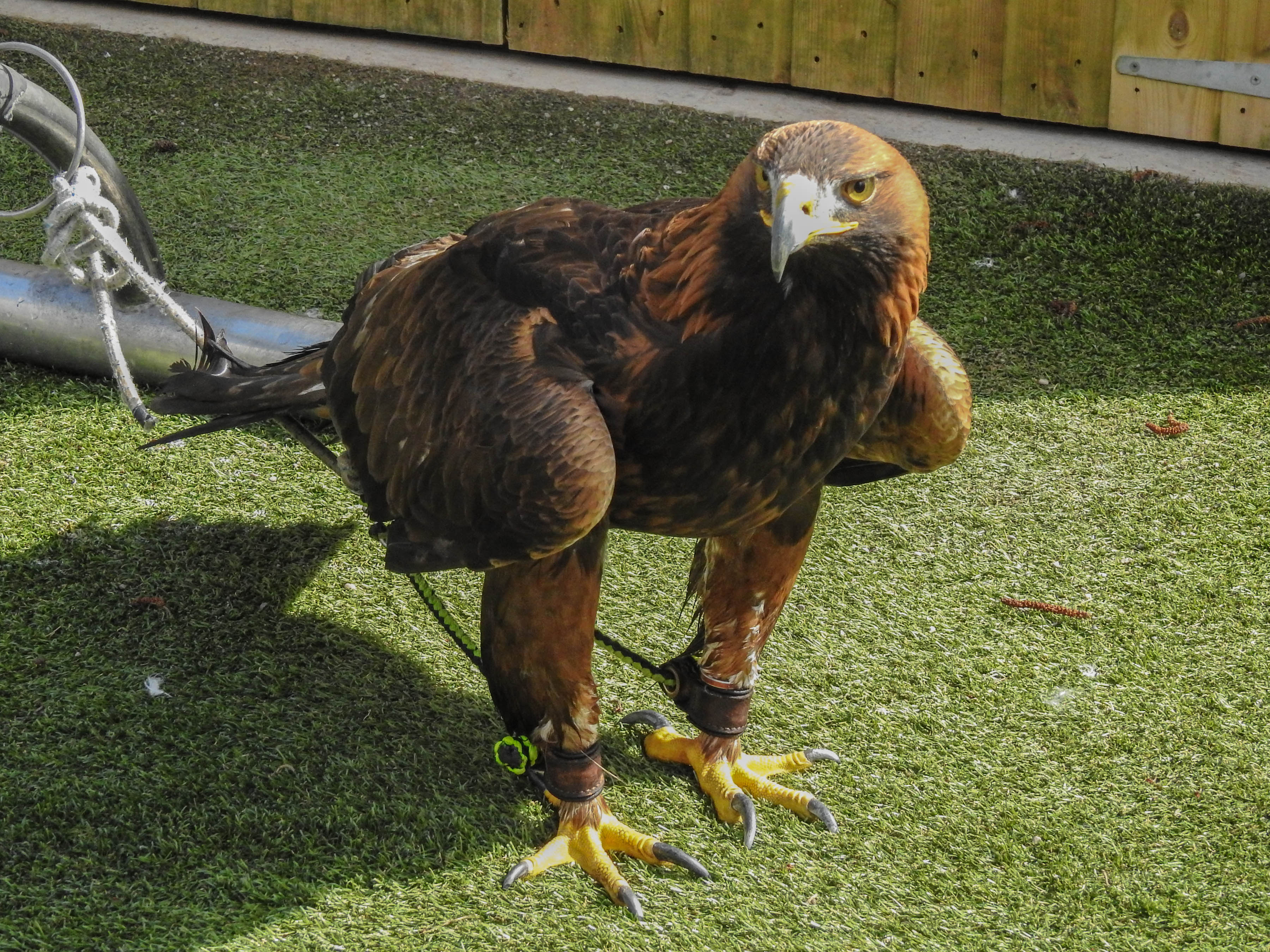 I’ve a lump in my throat as always when admiring wildlife in captivity. Is it worth for a proud eagle to live if it’s not free to fly? Not only, but primarily raptors which impose the feel of freedom in me when I’m observing them circling high up in the sky, make me feel uncomfortable having lost their own freedom for human’s sake.
Humans gave this eagle the name Orla (Gaelic for golden lady). Despite the ties, she still tries to take off falling over repeatedly in a heartbreaking way. The owner comes over to put her back in her cage as he sees her vain attempts to take off and probably also the spectators pity. He knows her and she knows him well. She calms down immediately as she doesn’t have sight of the sky anymore. 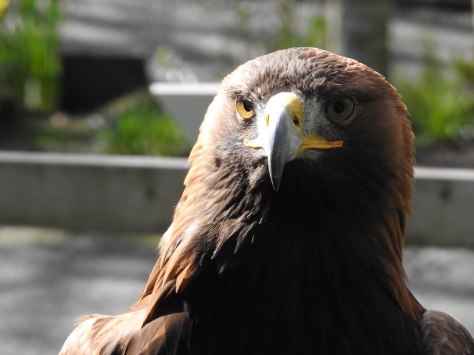 Can the value of education justify captivity of birds of prey (and any other wild animal)?

Sign boards, presentations and talks can provide the opportunity to educate an audience about a particular species, their behavior, biology and habitats, as well as the threats they face in the wild and what people can do to support conservation efforts. 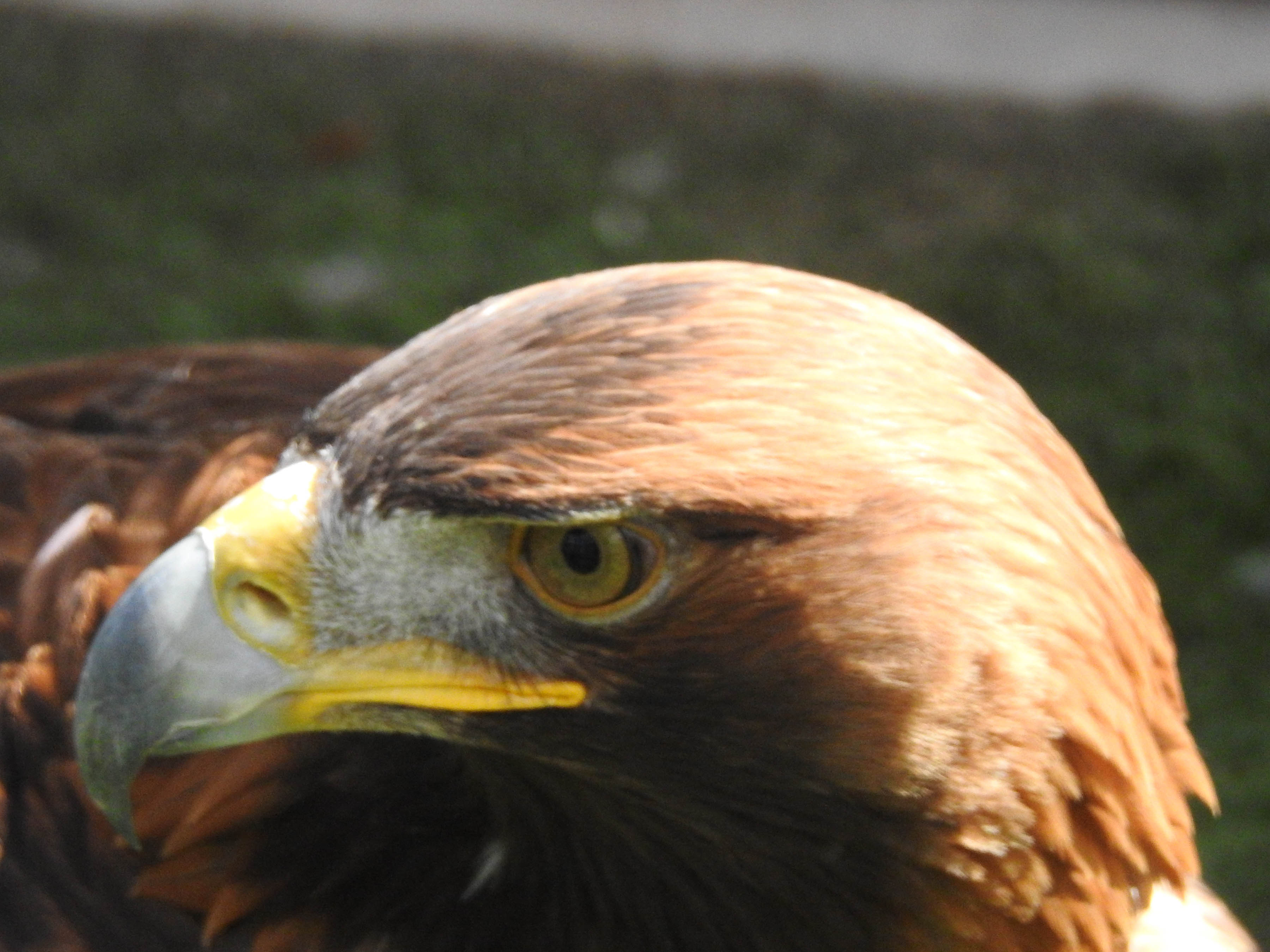 The piercing eye of a Golden Eagle

Breeding endangered species might vindicate the captivity of raptors, isn’t it?

Surely it would be a good thing to breed endangered raptors like the Golden Eagles and to reintroduce them to their natural habitat if possible. Their are only very few zoo’s in England which are actually involved in co-ordinated breeding programs  and surely to keep one single Golden Eagle like Orla isn’t doing any good for breeding reasons.
Anyway, over 80% of the individual birds in zoos are not of threatened species. (Source: Last in the pecking order – Captive birds in English zoos).

These are some of the other birds we photographed at Loch Lomond Bird Of Prey Centre.

What about exercise? Raptor shows are surely an impressive way to see the birds fly and they get a change of their boring existence as a caged bird.

Flight restrictions of varying kinds are probably the biggest welfare problem facing birds in captivity. Even if there are shows with the raptors its highly unlikely that they can fly every day and more than just a few minutes. Smaller owls are not practical for display flights anyway. Its certainly suitable to exercise the birds and unique to see birds of prey spreading their wings just a couple of meters away from oneself.  The owner of the Bird Of Prey Center in Balloch mentioned his disappointment not to be able to show us his birds in flight – so were we. Other than that he took the time, educated and answered questions tirelessly which was very interesting. 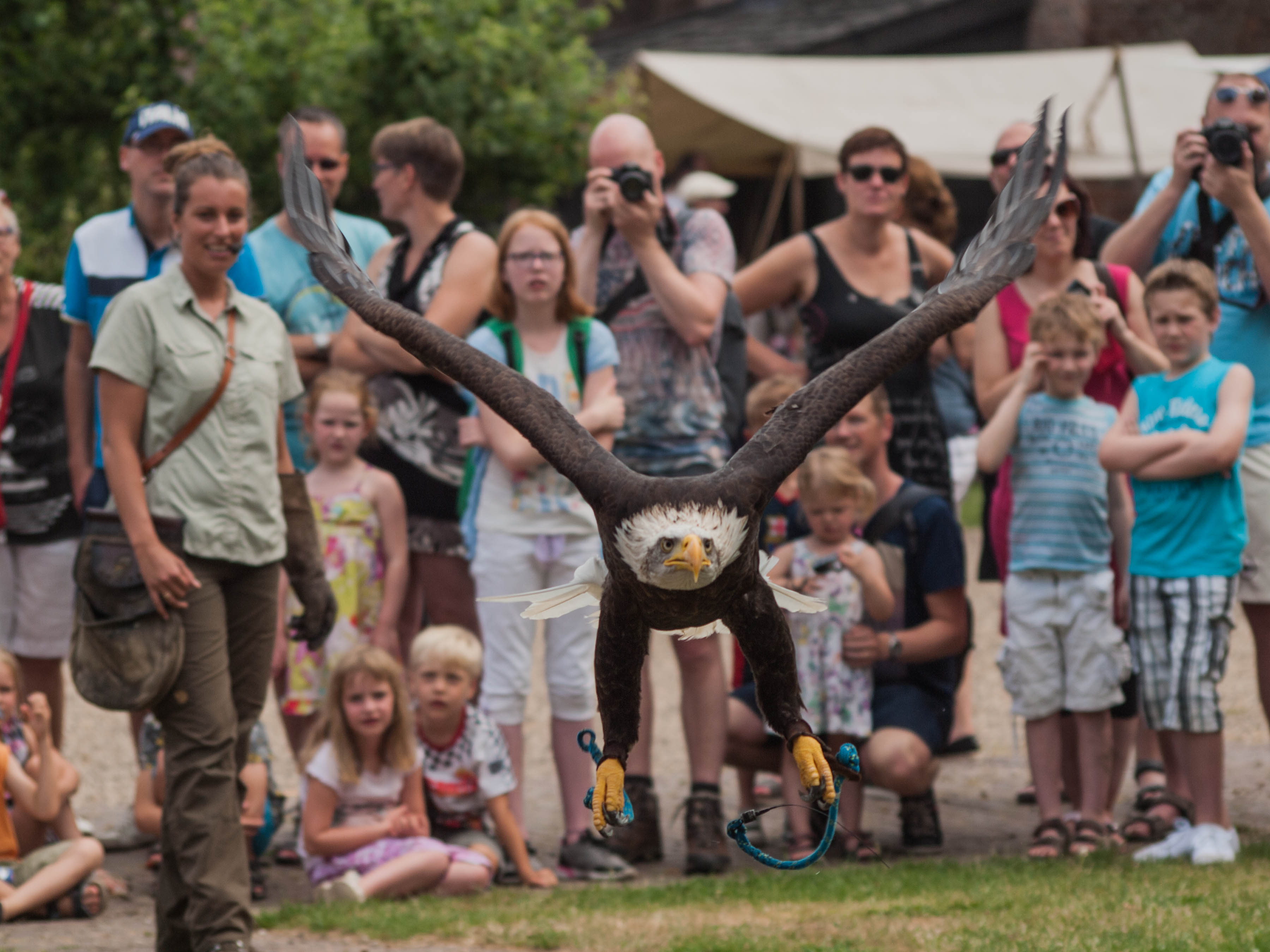 Raptor Show in the Doornenburg, The Netherlands

Here is the link to all of the birds which you find at the Loch Lomond Bird of Prey Centre in Balloch.

Sources:
Scottish Raptor Study Group
The RSPB
National Eagle Center
Last in the pecking order – Captive birds in English zoos
What do you think of Birds of Prey Centers and Raptor Shows or Zoo’s in general?