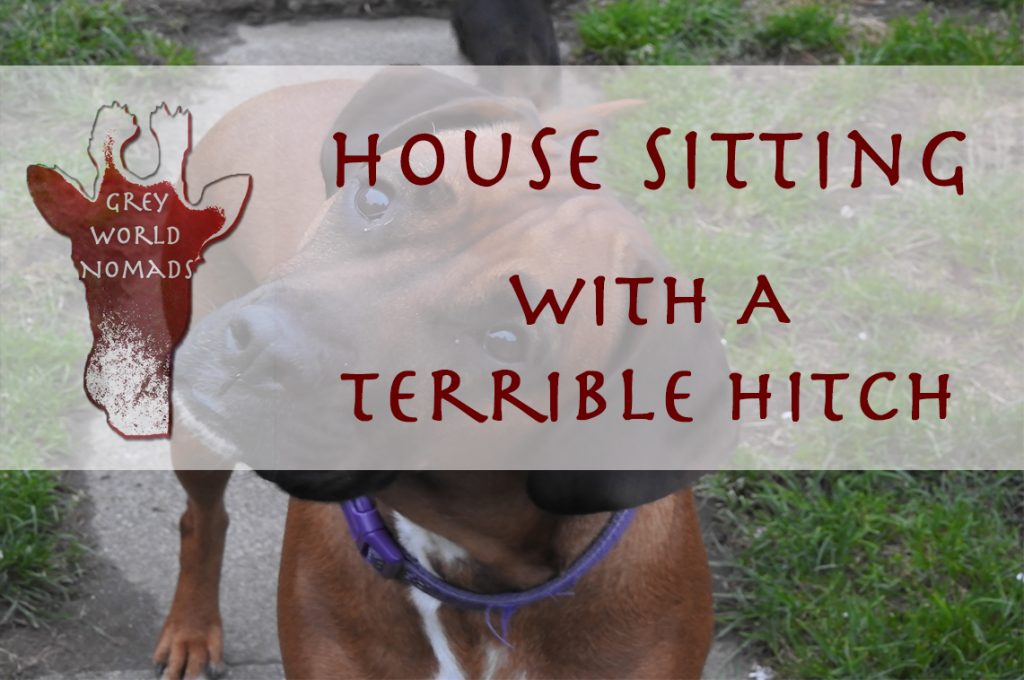 House Sitting With A Terrible Hitch

We thought it would be a good idea to sign up for a house sit close to London. London is expensive and so, we’d be able to visit London without having to pay for accommodation. That’s what we figured but …

But – that was not our main problem!

We arrived at our house sit and left Vlou, our traveling Beagle, in the car as we always do. Because he travels with us we arranged also with these homeowners in advance, that we walk the dogs first on ‘neutral’ territory when we arrive so that the dogs get to know each other without getting protective about their home.

There were actually two dogs we would care for during our house sit. A little Pincher and a  Rhodesian Ridgeback – Boxer mix called Sheba and Roxy. The latter turned out to be so aggressive towards any other dogs that she immediately wanted to attack Vlou as soon as she saw him no matter if on neutral territory or not or if on a leash or not.  Even the smell of Vlou drove her crazy and she would run around and bark during our check-in.

After a good nights sleep which Vlou had to spend in the car outside, we went for a walk in the nearby park. Vlou considers luckily our car as his home anyway. The owner took Roxy on a lead and walked in front of Vlou and me with a minimum of 50 meters distance. Despite space and even though she’d never even got close to Vlou to meet, she tried to get off to attack him viciously.

But it was not only Vlou she tried to attack – it was any dog which came into sight!

We didn’t want to worry the house owners but we didn’t feel good about this house sit at all. There was so limited space in the townhouse that we’d be struggling to separate the dogs safely. Sheba was able to open the sliding doors anyway.

We tried to keep our spirits up till the family left their home cautiously confident to be able to make a plan afterward somehow.

Vlou had to stay upstairs in the bedroom when we were at home and Roxy had to stay downstairs in the living room-kitchen area.  We blocked the sliding door downstairs so that little Sheba wasn’t able to open it anymore and we built up a temporary wall with luggage on top of the stairs as a backup. That was our luck as giant Roxy managed somehow to get through the sliding door anyway on the second day. What a shocker!

A professional dog trainer was supposed to walk Roxy twice in the week during our stay but she came only once, unfortunately.

Mrs. Sheba and Roxy in the backyard

We felt so bad for Roxy as we didn’t have to walk her because of her aggression on one side but on the other side, we didn’t want to take the responsibility either. If she would have been able to escape, a disaster would have happened. She tended even to show aggression to people passing the house. Roxy was a young, well-built dog full of energy which she couldn’t get rid of in the tiny town garden.

The thought she might find a way out of the flimsy fenced garden didn’t make us feel comfortable.

As the day went on we got to love that huge clingy dog anyway, hoping for her that the owners find a solution for this unpleasant dangerous behavior.

It was for sure one of our yet most difficult dog sits we’d experienced. Very relieved for all of us when we could hand over the house back to the owners without any major discomforts but the daily mop up of accidents of old Sheba which wasn’t able to control her bladder anymore.

So what! Mrs. Sheba doesn’t care if ‘it’ happens inside

We learned a lot during this house sit and certainly adjusted our questions for the homeowner before admitting to a house sit with animals. In general, we got the knack of:

Dog Sitting and City Sightseeing doesn’t work well in combination if you are not in the City Center to just stumble out of your door for some major attractions.

A  fragile little dog with huge eyes and a brave heart, Mrs. Sheba