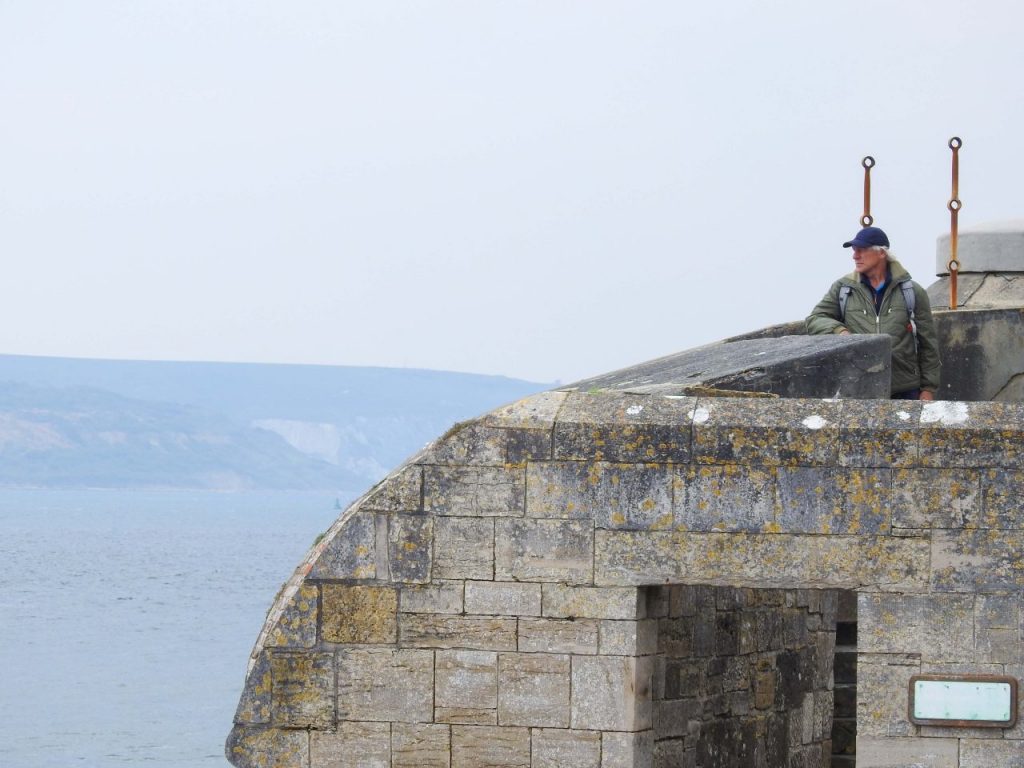 We packed Vlou, our traveling Beagle, and Maggie, the Pointer from our house sit in Swanmore, Southampton, in the back of the car to take a drive in search for places of interest where we could walk the dogs without a lead. New Forest National Park with its coastal medieval Hurst Castle at the former southern defense line within the birds paradise of Lymington – Keyhaven Nature Reserve sounded like a good bet as it lies in the  county of Hampshire, not far from our temporary home.

Our GPS told us it would be 1 1/2h hours drive to Hurst Castle which is situated in the south-west corner of New Forest National Park, despite it being only 35 miles drive. “That’s quite odd,” George contemplated. “I guess it is because the roads in the countryside are only wide enough for one car. One needs much more time to get from A to B as it is necessary to reverse into a pullout to be able to pass.” “That seems to be the deal all over in  the United Kingdom,” I reminded George. “That’s one reason. The other is, that the highways aren’t fast either, with this traffic density and the roundabouts which interrupt the flow. I still can’t get over it that the motorway access is only managed by roundabouts on the highways which are actually slow down the traffic to almost zero every few miles!” He grabbed a peppermint as the next signboard to slow down before a circle emphasized his statement. “Every little town seems to get it’s own roundabout on the motorway to get access to it. It’s the first time I have seen such a thing.” “And pedestrians and horses get their crossings on the highway, too, which I haven’t seen up to now anywhere else either,” I added. “Shush! Don’t lament about the English, otherwise they’ll send you home early!” George chuckled.

As we draw nearer to the boundaries of the National Park George read some historical facts to prepare our visit: “In the 12th century AD New Forest was a royal hunting ground for King William I and his noblemen. William ‘the Conqueror’ set aside the forest as his ‘Nova Forestra’ or ‘New Forest’. Centuries of grazing by deer, ponies and cattle have shaped the landscape. The National Park status was awarded to the New Forest only in March 2005.” “That’s probably why we didn’t find too much about the Park in the internet. It’s not yet that established.” I circled around another roundabout. 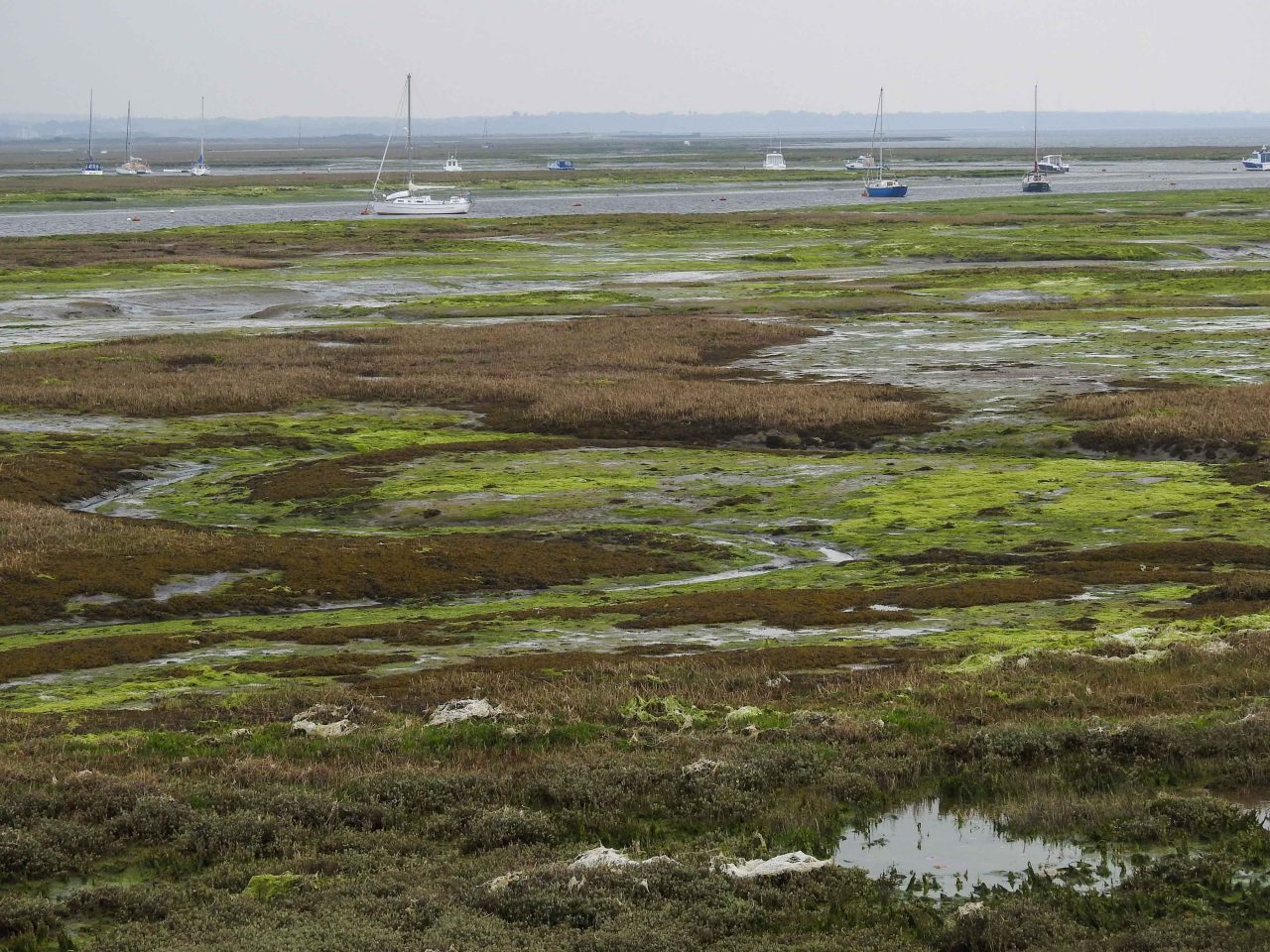 George continued to read: “Along the coast of New Forest National Park you find Nature Reserves with marshland which attract migrating birds and local fowl as well. The strategic significant position and the closeness to sea with seaways to the Isle of Wight and France made the English ancestors build some historic castles, forts and ports which played important roles during the reign of Henry the VIII, but also later in the I. and II. World Wars.”  “Hurst castle is one of these forts.

I didn’t choose to visit this for historical reasons but more because you can only reach it by a 20 minute walk on a dyke which crosses the marshland with view of the harbor in Keyhaven, the lighthouse and Hurst Castle or by ferry from Keyhaven,” I interrupted his history lesson. But George went on reading unfazed. 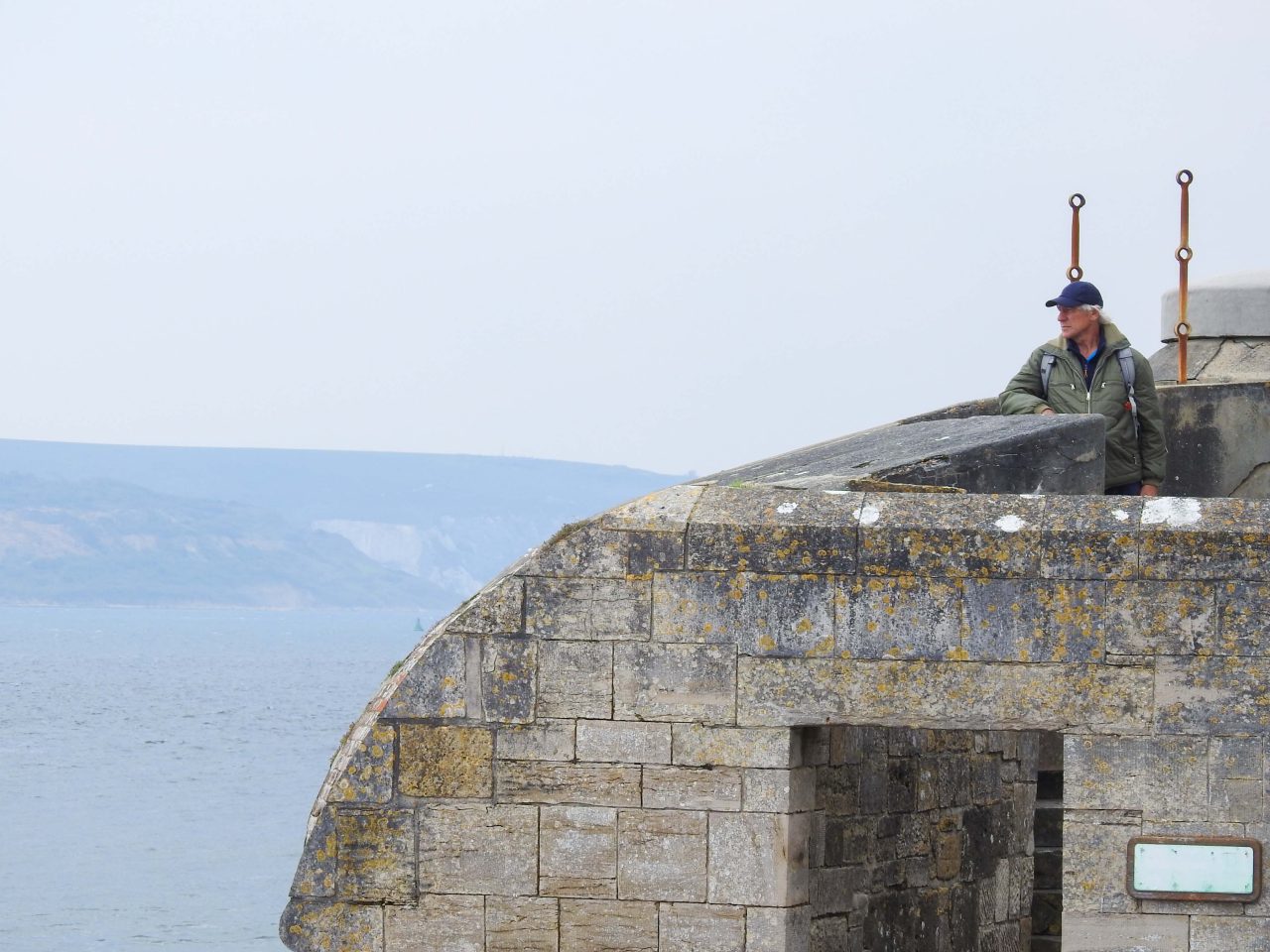 “Henry VIII built Hurst Castle as part of his south coast defenses in 1544. Together with forts on the Isle of Wight it could effectively close the Solent.” He put his guide on his lap and looked inquisitional over his reading glasses at me: “That’s the channel between the Isle of Wight and the mainland, you know?” “I figured that one, thanks!” I answered snappily.

As we reached Keyhaven we followed the signposts to Hurst Castle. After a few missed turns we found the narrow road and parking at the beginning of the pebble causeway which had been mentioned in the guidebook. “If we wouldn’t have been traveling with the dogs we could have taken the ferry from Keyhaven, Marcelle.” “I know, but it’s much more enjoyable to walk anyway. I don’t know, however, if we are allowed to take them in the castle,” I admitted abashed. 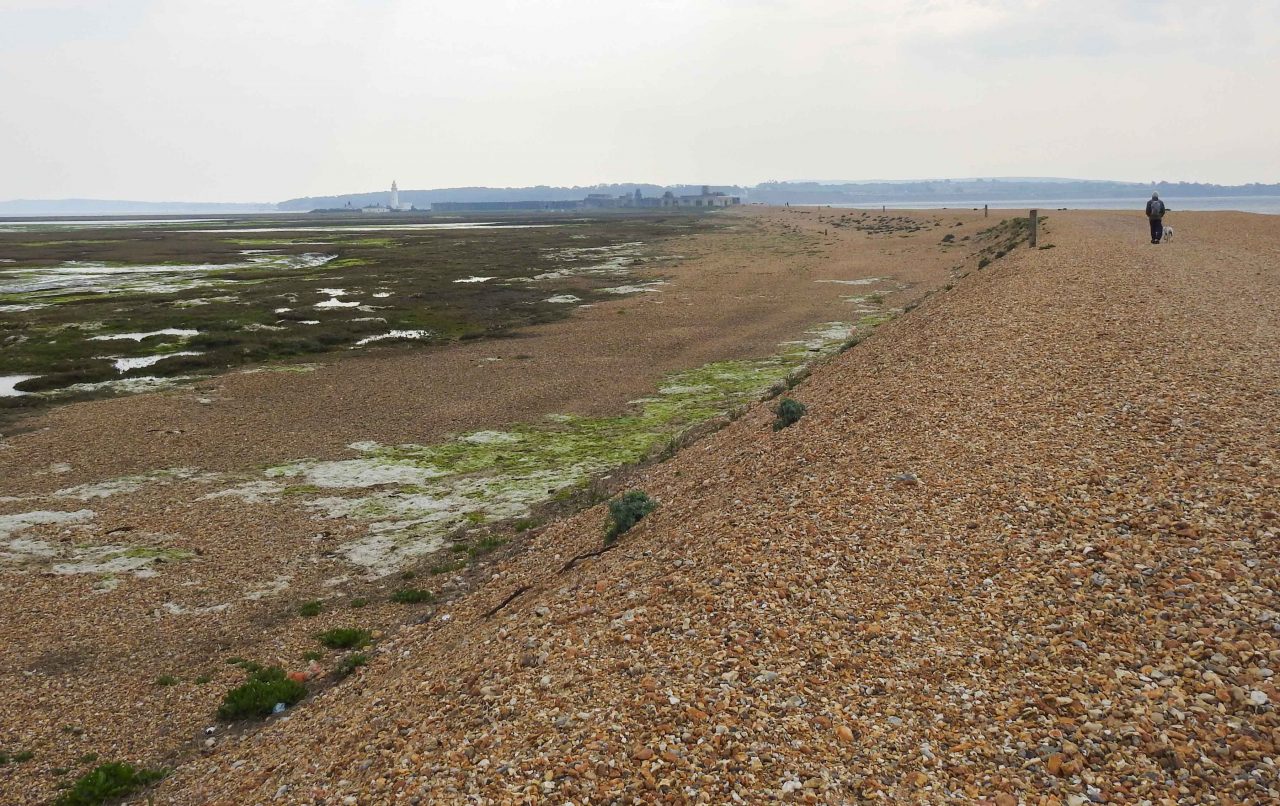 The dogs leaped out of the car delightedly and we could only grab their collar to take them on the lead till they were safely off the road. George walked up to a signboard: “Look, this poster announces that dogs should be kept on a lead all the time as the undefined plastic substance has been washed onto the beach which could harm them if eaten! ” “Oh, no!” I exclaimed disappointed. “That’s a bummer. We came here to give them a good walk without lead!” However, soon afterward we let them go as we saw other dog owners ignoring the warning. We watched the dogs carefully to prevent them from eating anything. The alien plastic substance, luckily, wasn’t to be seen.

Our feet sunk deep into the pebble bed as we made our way to the castle. Sailboats anchored in the channel which crossed the bright-green marshland to the left of us. To the right, the sea pushed its waves gently up to the causeway. On the other side of the Solent we spotted the Isle of Wight shimmering in various shades of grey. It can be reached by ferry from several ports on the coast of Hampshire. The clouds lifted slowly and the sun started to warm us up. The dogs didn’t run around that madly as usual as they also struggled with the pebbles. Vlou started to pant as he moved his little legs to keep up with the elegant pace of Maggie.

I had read previously that Hurst Castle had been abandoned and re-used many times. The fort was much modified in the 19th century as two large side-wings of Victorian brickwork were added to the ancient 12-sided tower to shelter the contemporary enormous cannons, searchlights, and ammunition as other amenities of the century. As we got closer we saw the medieval tower which precipitates from the more recently built extensions of red Victorian brickwork.

Arriving at the entrance we were relieved as we noticed that dogs were allowed in on a lead. We paid the £ 4.50 admission fee and started our tour around the medieval part of the castle. On the second floor, there were boards with pictures and descriptions of the different time periods in the history of this castle and the changing functions it had had during different times. But most of all I enjoyed the top of the castle with a stunning view to all sides. There were still marks where the cannons had been positioned.

In the extensions, we found gigantic cannons and the shells and expositions about the I and II World War with names of the fallen soldiers and the role of the locals during D-Day. A washroom showed the simplicity of the amenities during World War II such as a cot and stove.

Amenities in the extensions of Hurst Castle

Most interestingly I found newspapers from between 1939 and 1945.

The complex buildup of a lighthouse-light was explained in another room with a model of the adjacent interiors and living conditions of the guard. After all this interesting input we were hungry. There was a café-restaurant in the castle yard but we preferred to eat our sandwiches and drink coffee at the picnic-site within the castle area. As I was munching my sandwich a young Labrador which most probably belonged to one of the employees came to say hello to Maggie and Vlou.

He wanted to play and Maggie tried to get off the leash and was most frustrated that she wasn’t allowed. “Hang-on for a moment, you can play with him as soon as we are outside the castle!” I tried to console her. But only when I sent the young boisterous Labrador away with a firm word did she calm down. As we got to the exit I let her off the lead and she played excitedly with the young Labrador. Of course, being a Labrador, he had to jump in the mooring first!

We walked back to our car up to a signboard which revealed that we were actually in the Lymington – Keyhaven Nature Reserve. Just inside the seawall lie shallow, brackish lagoons connected to the sea through a system of sluices and tidal flaps. It was explained on the board: “The salinity in these lagoons varies widely, but is generally lower than seawater. This specialized habitat supports its own distinctive plants and animals.

What can you look for: 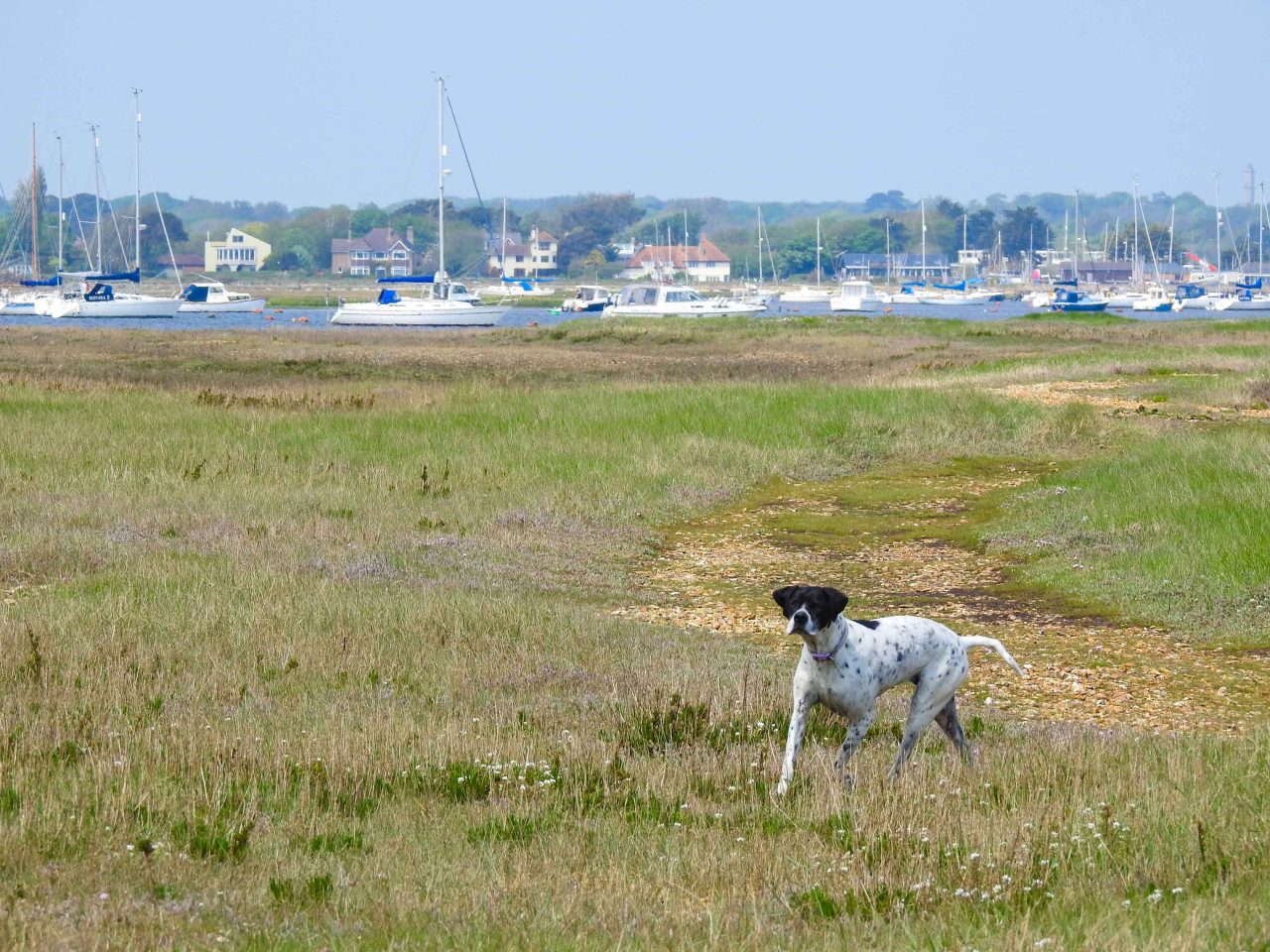 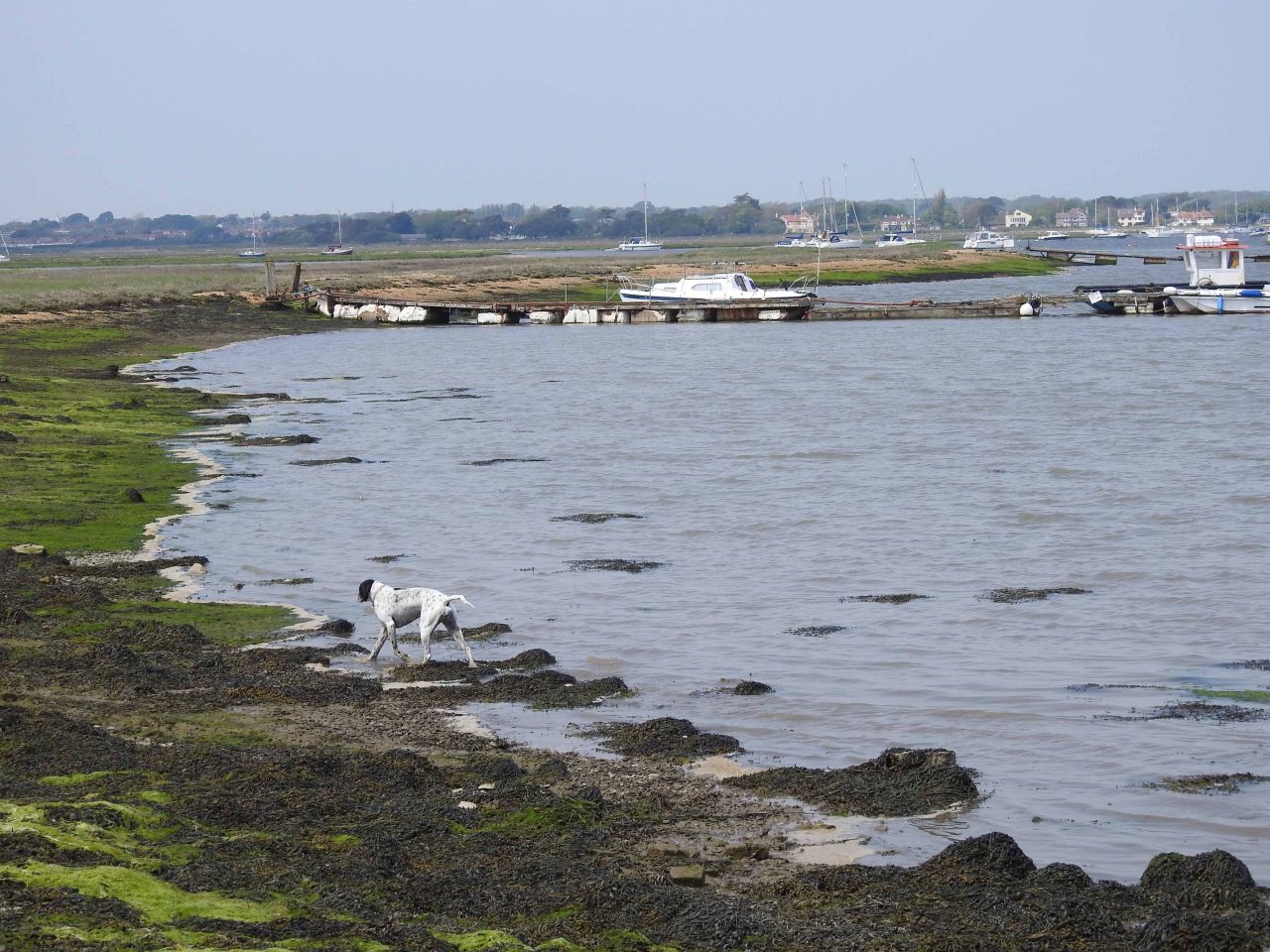 As I had learned beforehand in a guidebook about the coast of England, this region had not always been a peaceful place for wildlife though. In the 18th century, the area between Lymington and Keyhaven was completely industrialized for the production of salt. It was important in this area from Middle Ages until 1865 when cheaper mined salt from Cheshire forced the closure of the last saltern. If you look carefully there are still signs of a major industry which once thrived here. 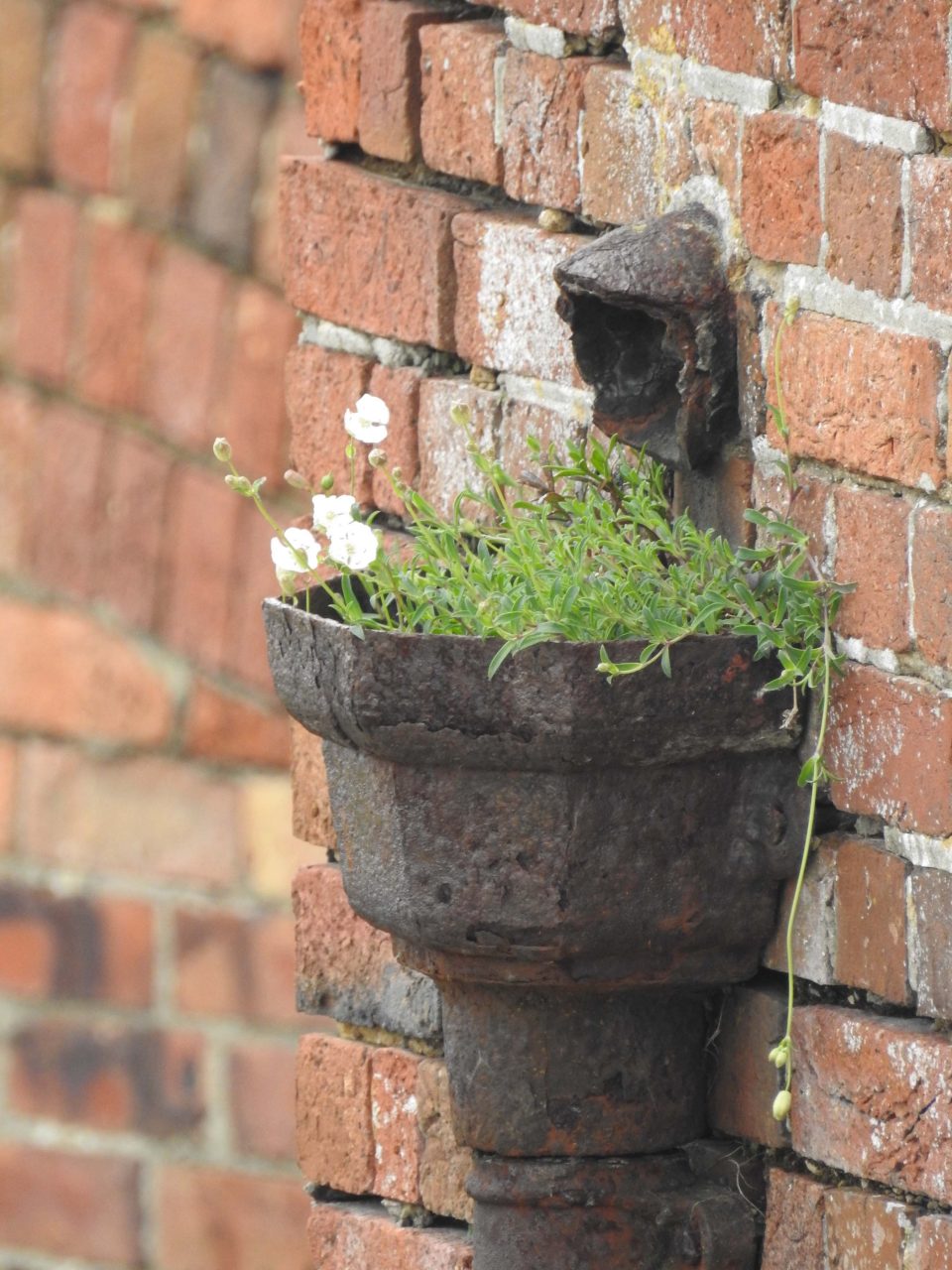 Do you know countries other than the United Kingdom which interrupt their highways with roundabouts?!