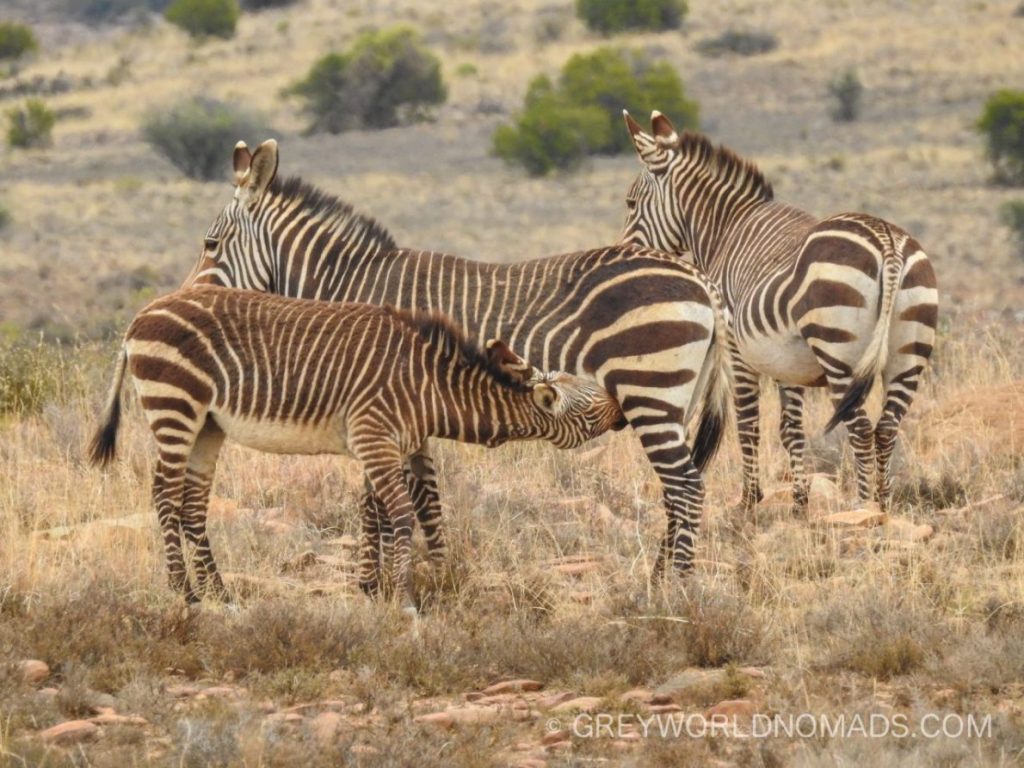 Watch Your Back For Lions

We wanted to see it – the Zebra with the big stripes on its bum, black and white alternating down to its hoofs and with a white belly: the endangered Cape Mountain Zebra of South Africa.

We’d been heading up from the South African south coasts mild and humid weather conditions, many hundreds of kilometers through the bone-dry Karoo to Cradock, where we filled up  with diesel and provisions for the next four days in the Mountain Zebra National Park. 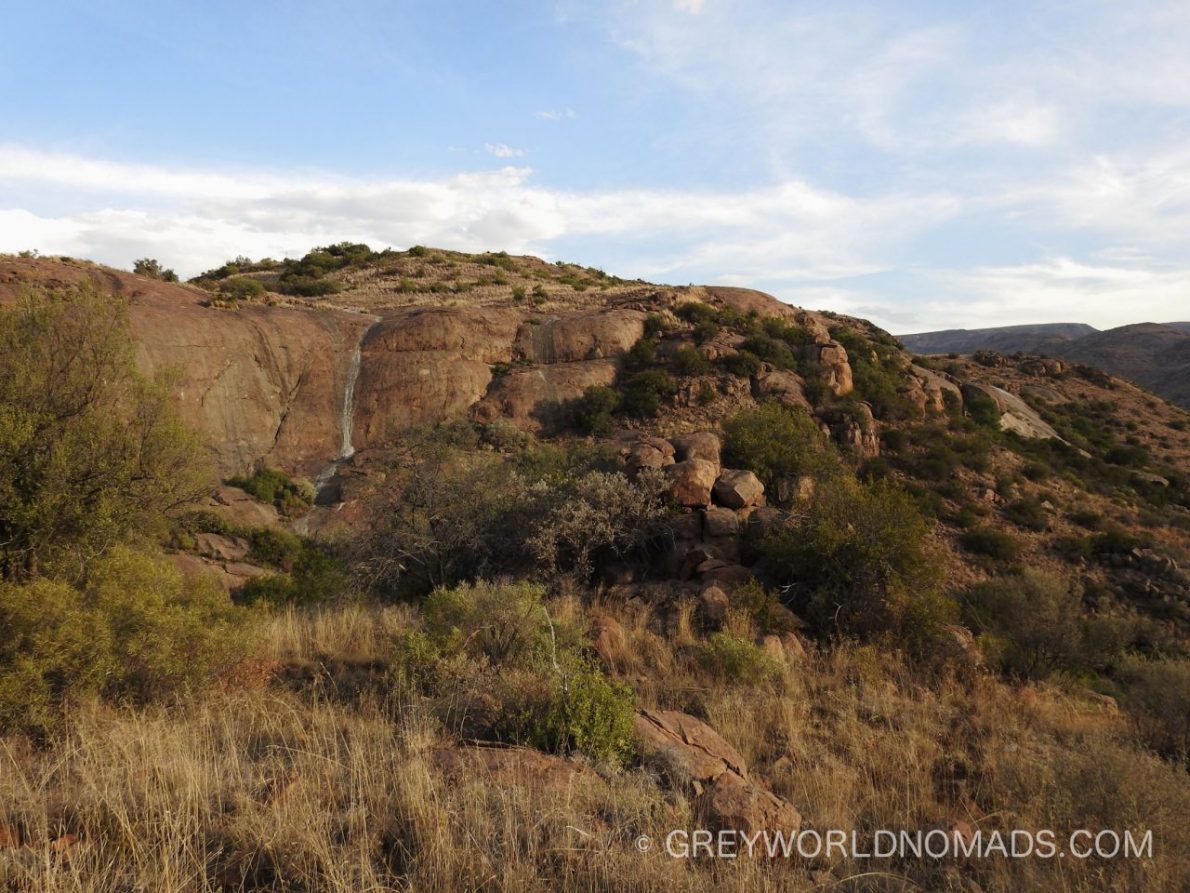 The Dry World Of The Karoo

Only a few kilometers outside of the town a signboard told us to swing left towards the reserve. After passing the gate the tarred road soon turned into a dirt road, which had these distinctive unpleasant bumps, which made us vibrate like someone trying to operate a jackhammer. 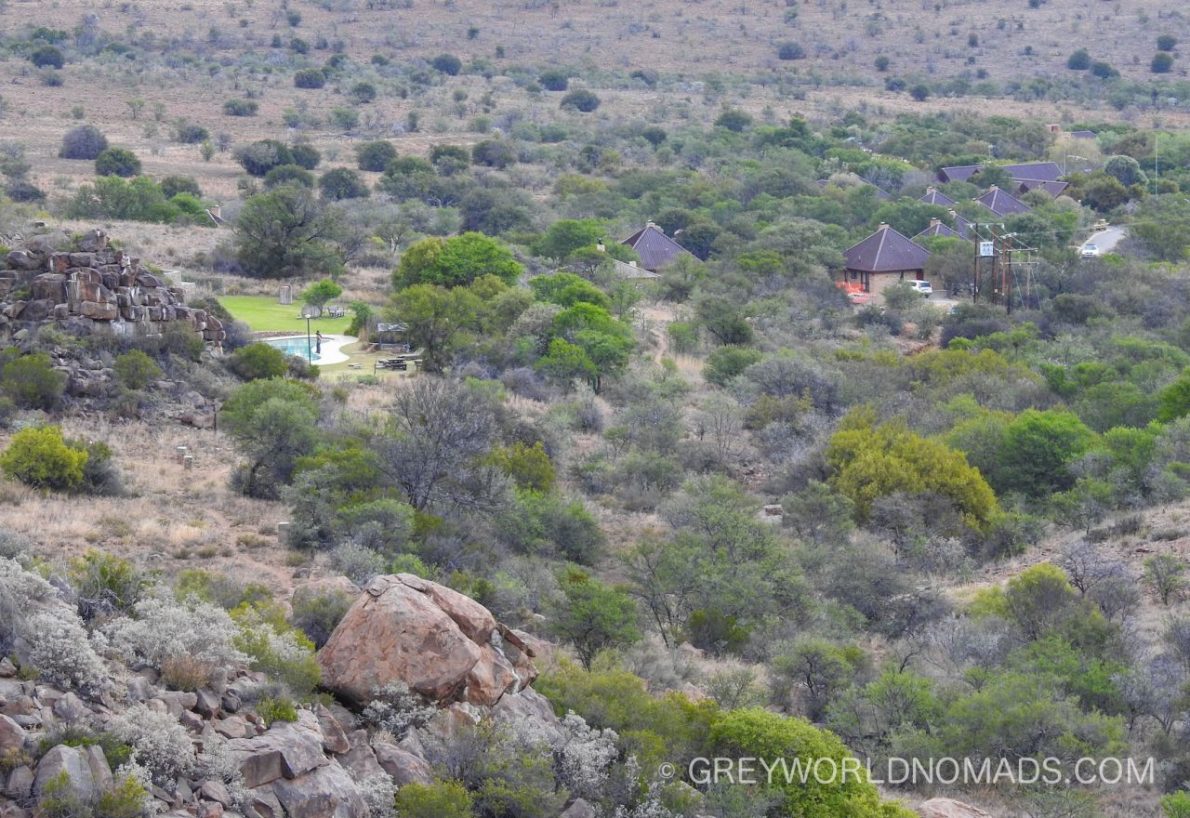 Being well prepared is the wise rule heading into the remote bush. Rather than reducing the tire pressure we’d thought it better to drive fast over these bumps to make the car rattle. The answer was given immediately when I felt a pull to the right at the steering wheel and a strong smell in the air, which couldn’t have been any else than hot gum burning up on the surface – a puncture on our right tire at the back of the car. 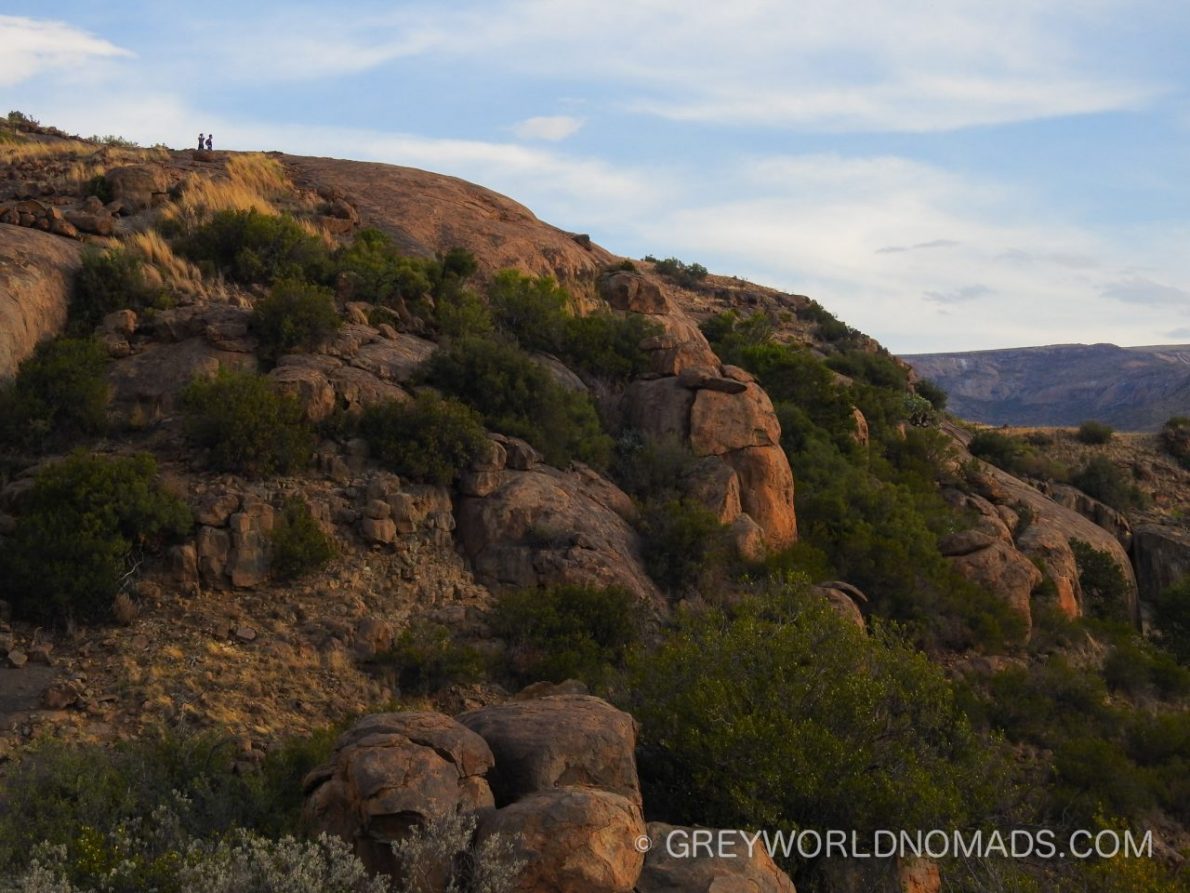 Walking Trail Within The Fenced Area Of The Camp

A flat tire in the middle of the national park, where wild animals roam freely? “George?? I watch your back to keep you safe, ok?” Being a South African, George was much more experienced and quicker than I had been changing my first flat tire in a remote region of Baviaans Kloof on my own (two hours – I had to figure it out with the Land Rover manual in one of my hands and the jack in the other!). 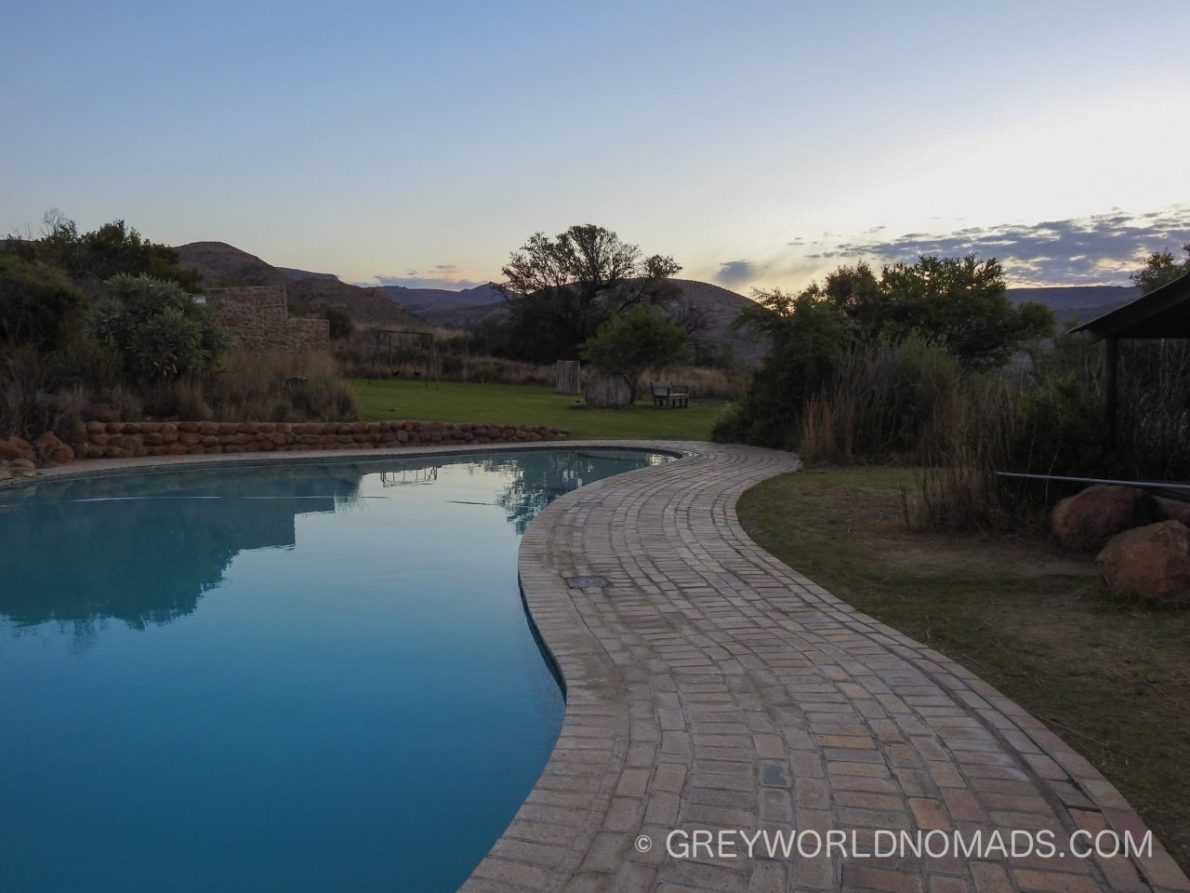 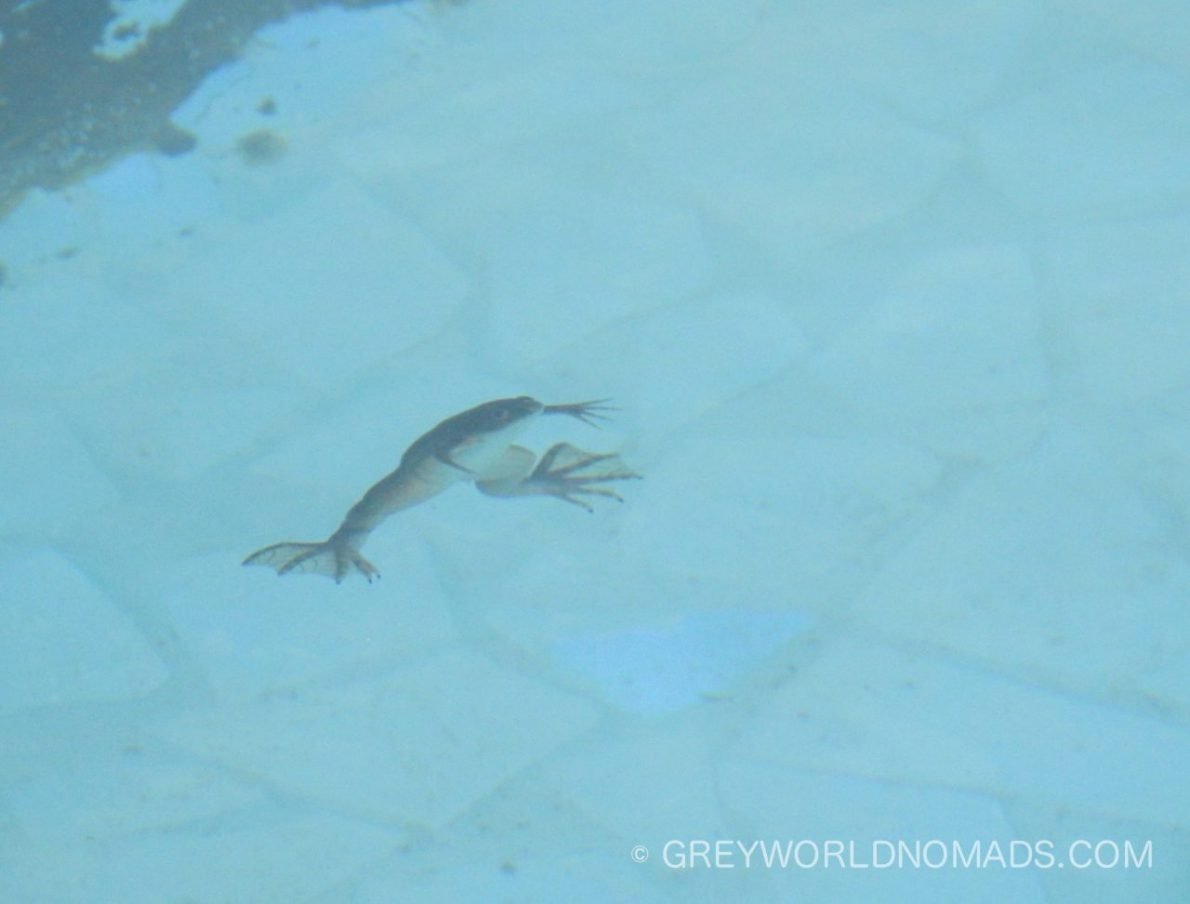 We arrived safely at the campground and were still early enough to choose a shady campsite before the best ones were taken by the fully equipped, luxury caravans of the South African grey nomads which roam the national parks extensively. 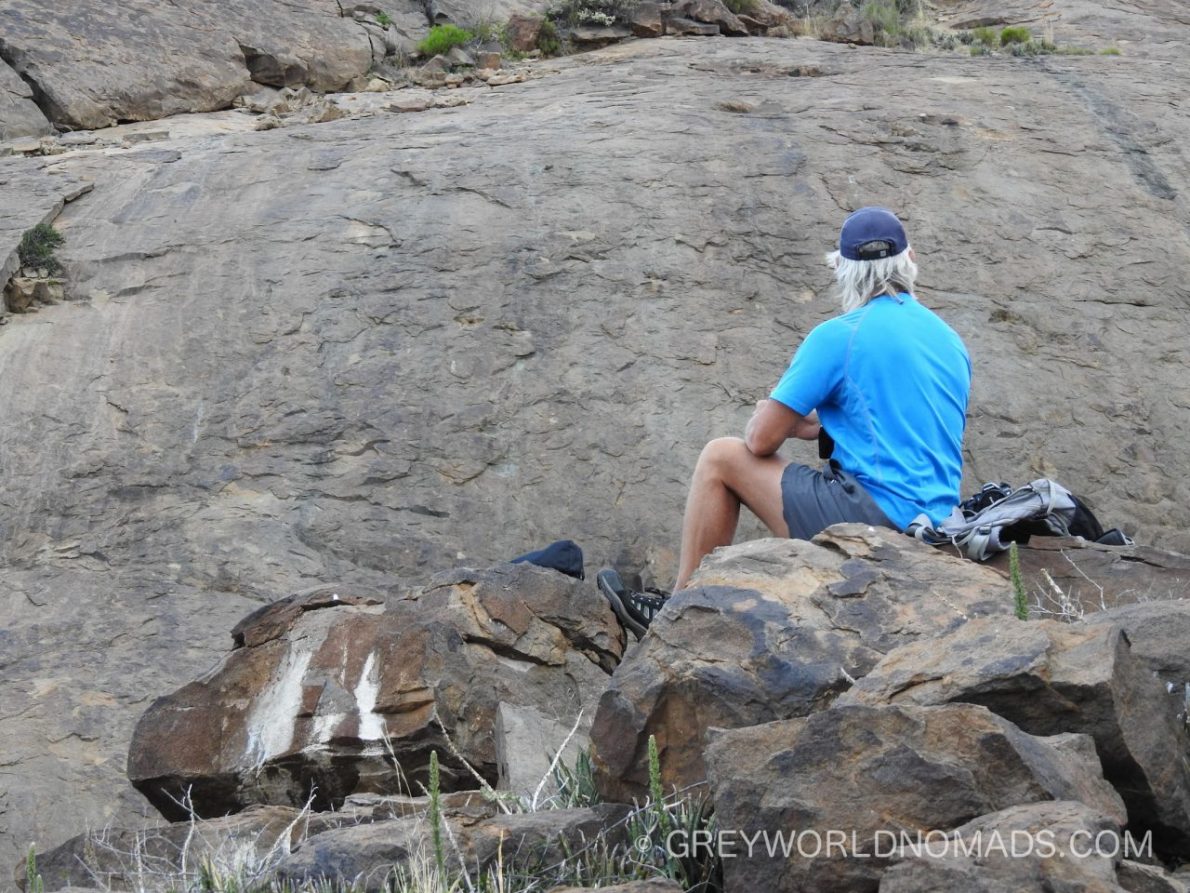 Neither George nor I had been in a National Park in the Karoo before and we were stunned by the rough-rocky and thirsty scenery which was revealed to our eyes. The heat took our breath away in the daytime and we needed a second blanket in the night to keep us warm. Spiky trees with needles longer than a toothpick made clear: this is a harsh environment for animals and humans. 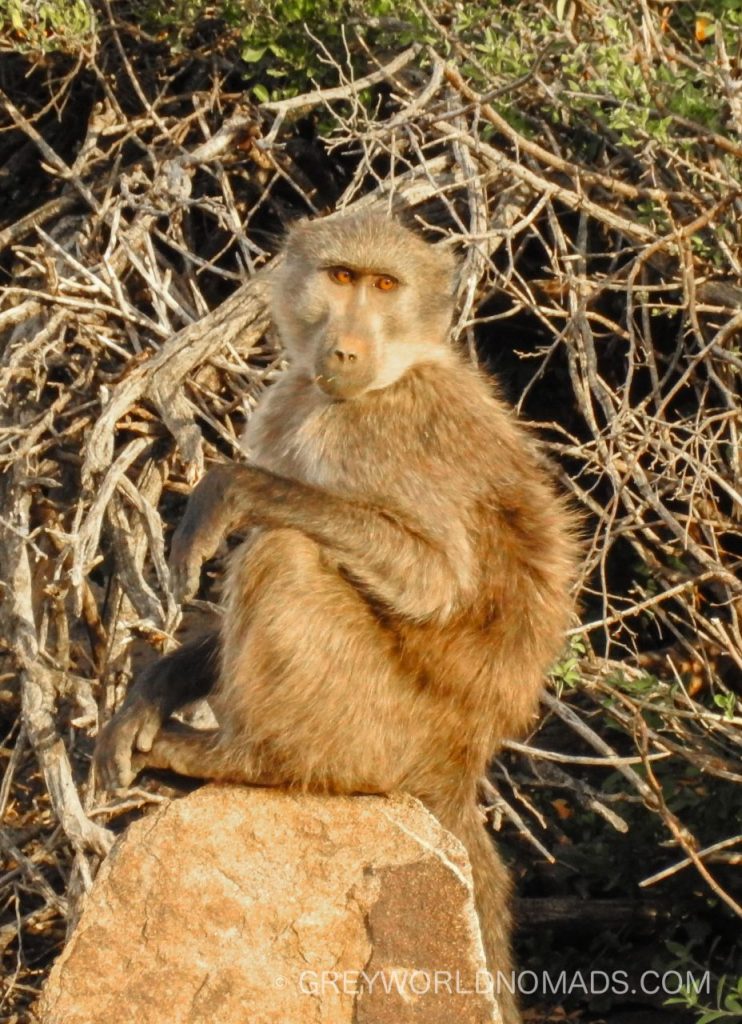 A short climb from the camp up to the mountain we found the swimming pool with view over the whole valley. In the pool a few frogs couldn’t belief their luck to find a pool of this size to enjoy themselves. They had to share it with us though. 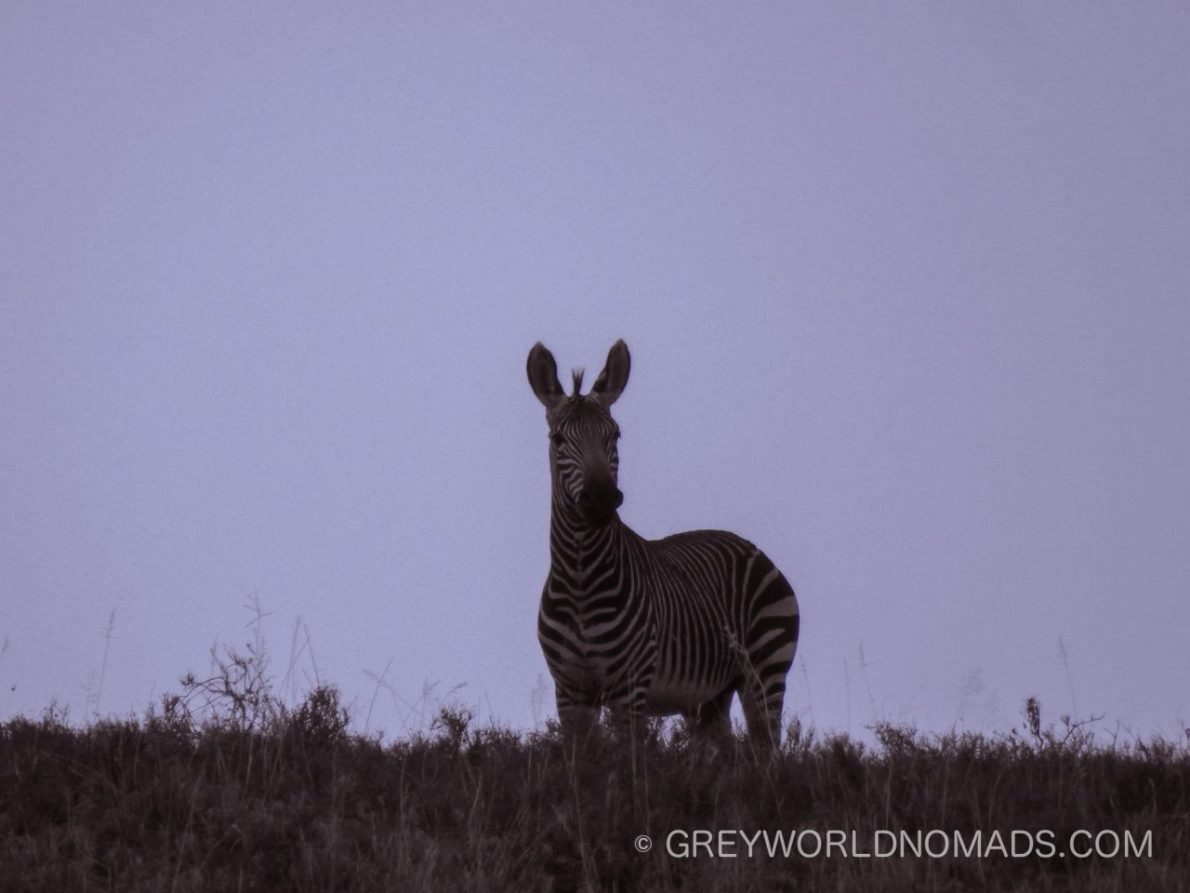 My First Sighting Of A Cape Mountain Zebra 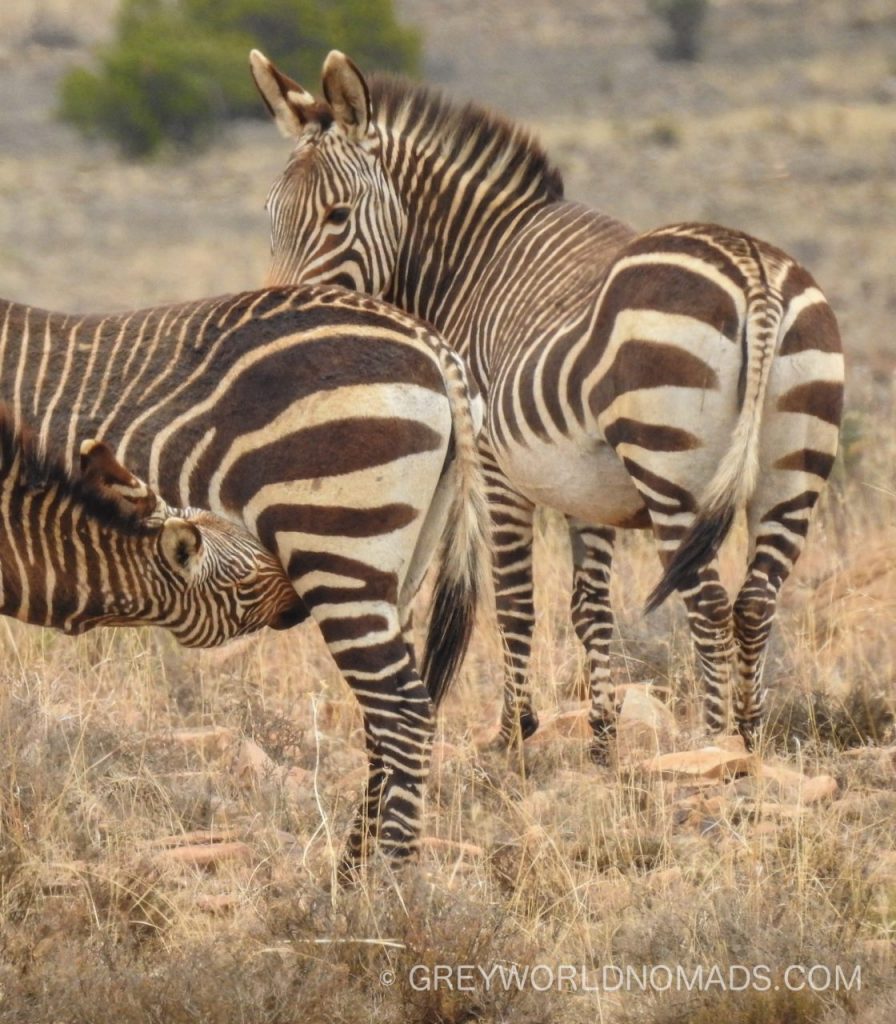 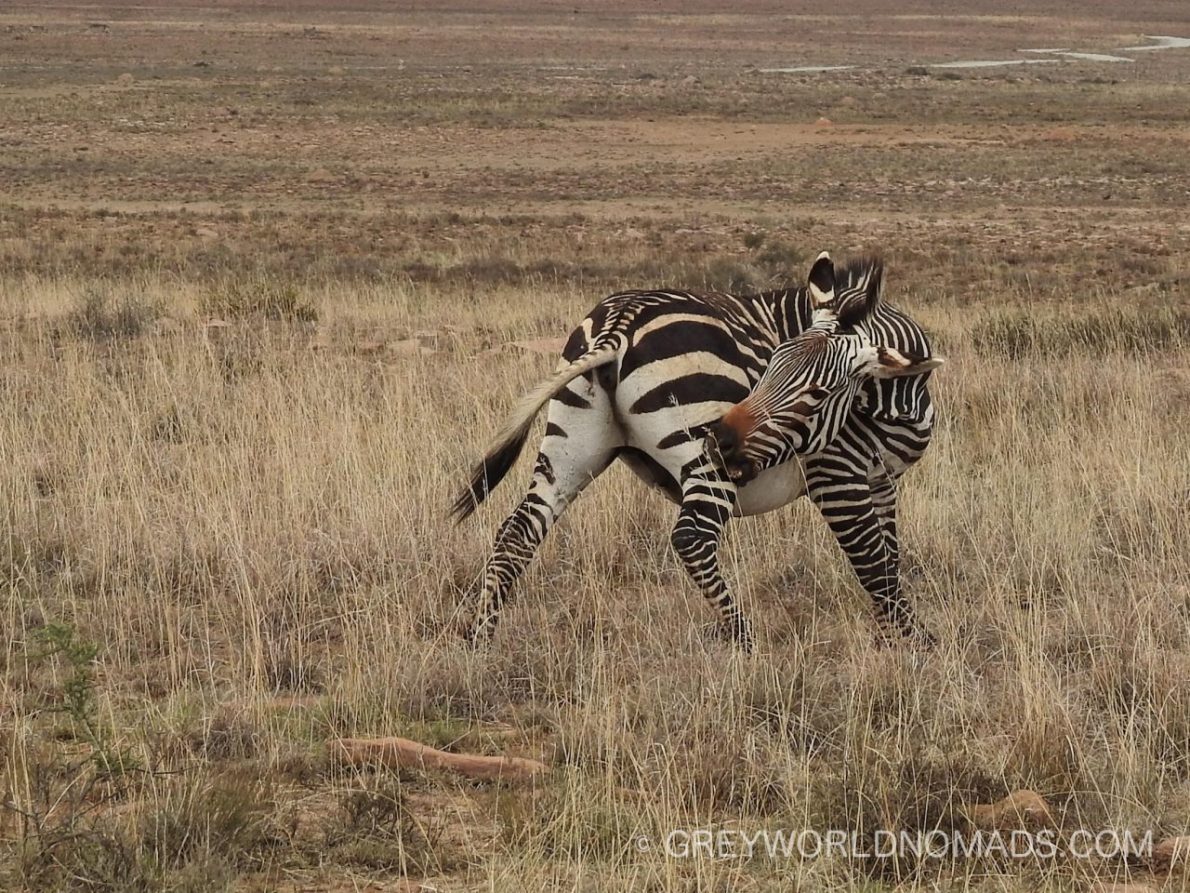 Later we did a walk on a sign posted circular path within the camp, in a safely fenced off area. We watched a few baboons enjoying the late evening sun on the warm rocks, where they settled for the night when all of a sudden a shadow emerged from the horizon. 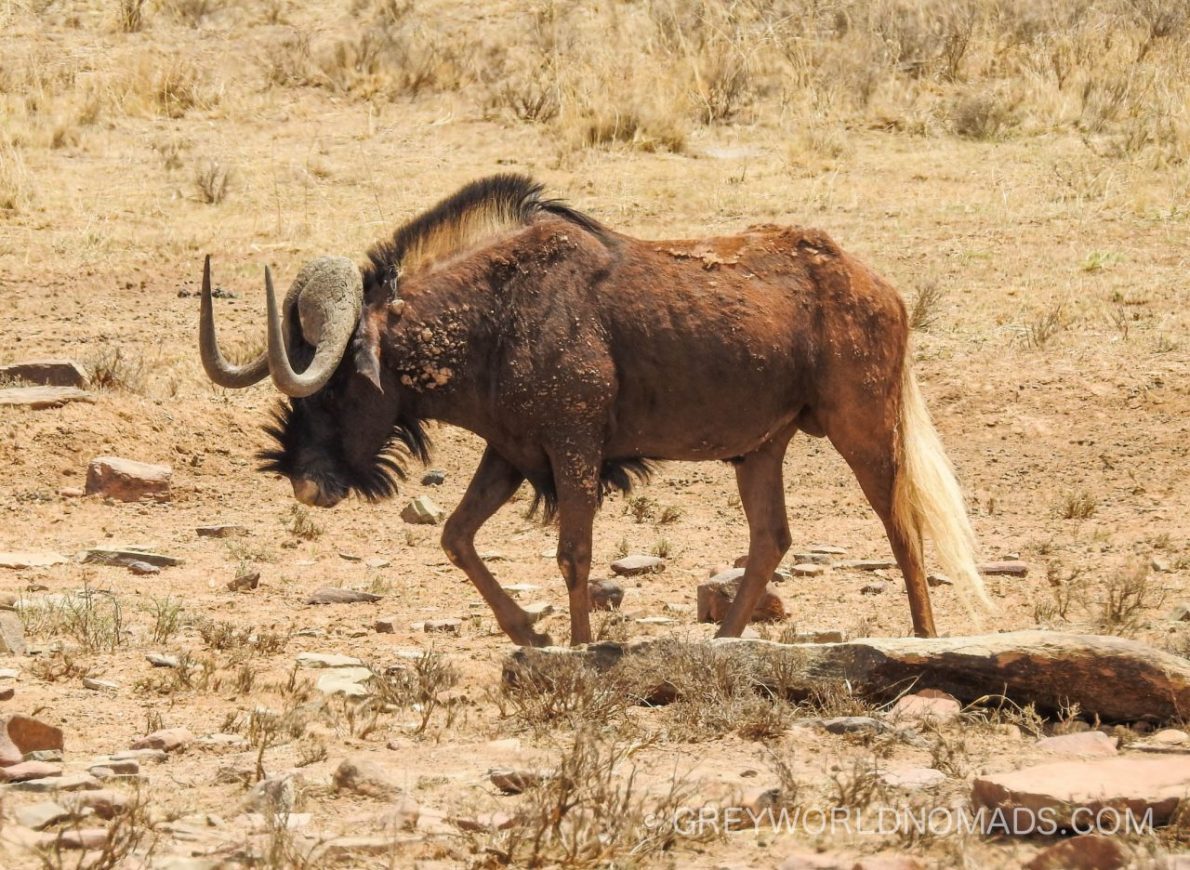 Our first Cape Mountain Zebra appeared like a ghost. We only saw its shape, as the sunset was almost gone. We sat there enjoying the magic place with its many voices of nature. 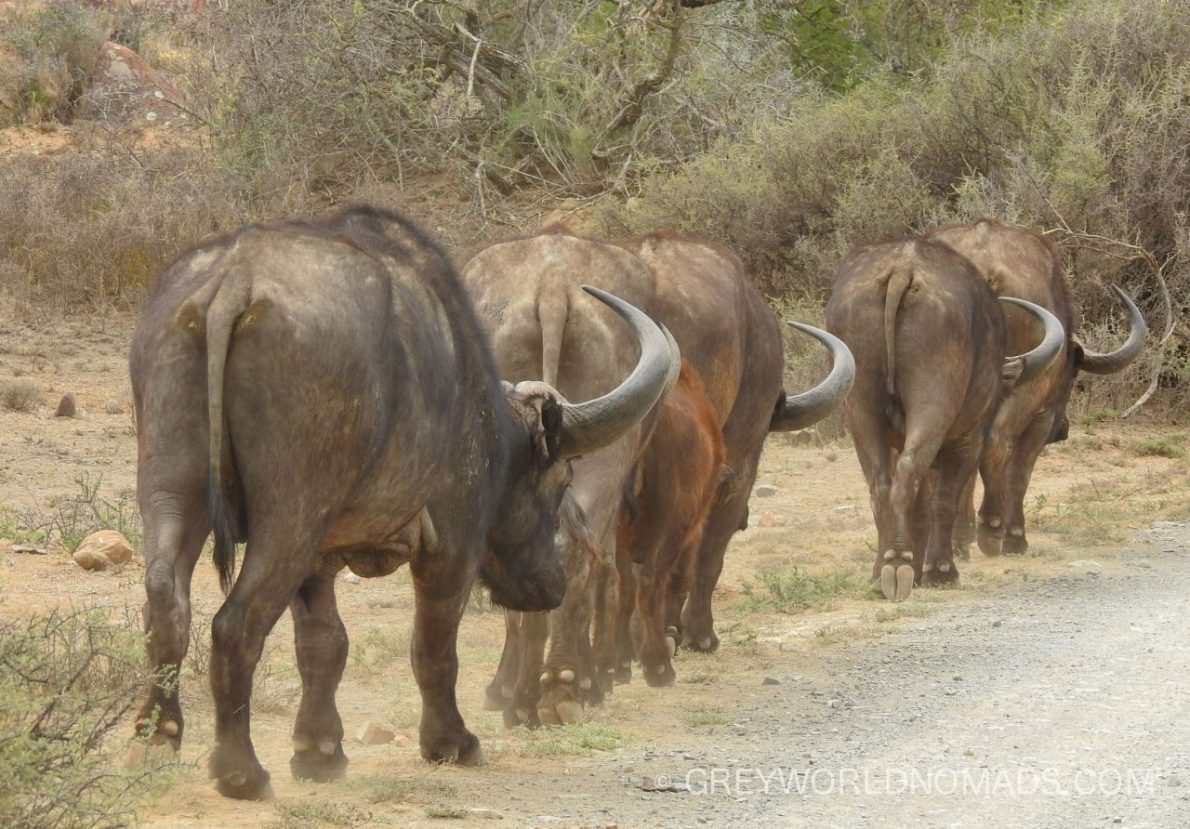 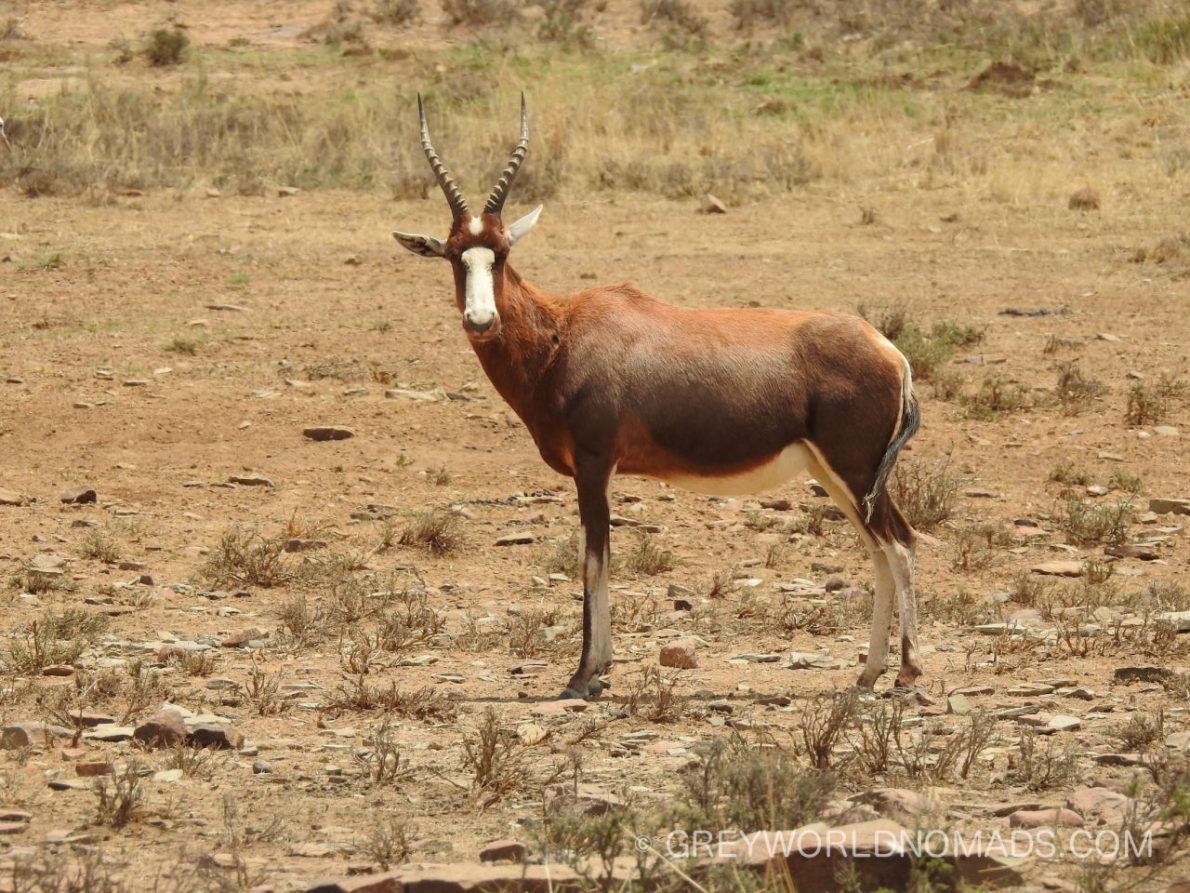 Only a day later when we’d organized a new tire for our Landy did  we dare go on a safari drive. We met various antelopes like Kudu, Springbok and Hartebeest, Ostriches, a small herd of buffaloes and finally Cape Mountain Zebra’s, even a foal drinking the milk of its mother. All in good shape despite the harsh conditions of this dry land. They know how to make the best of it. 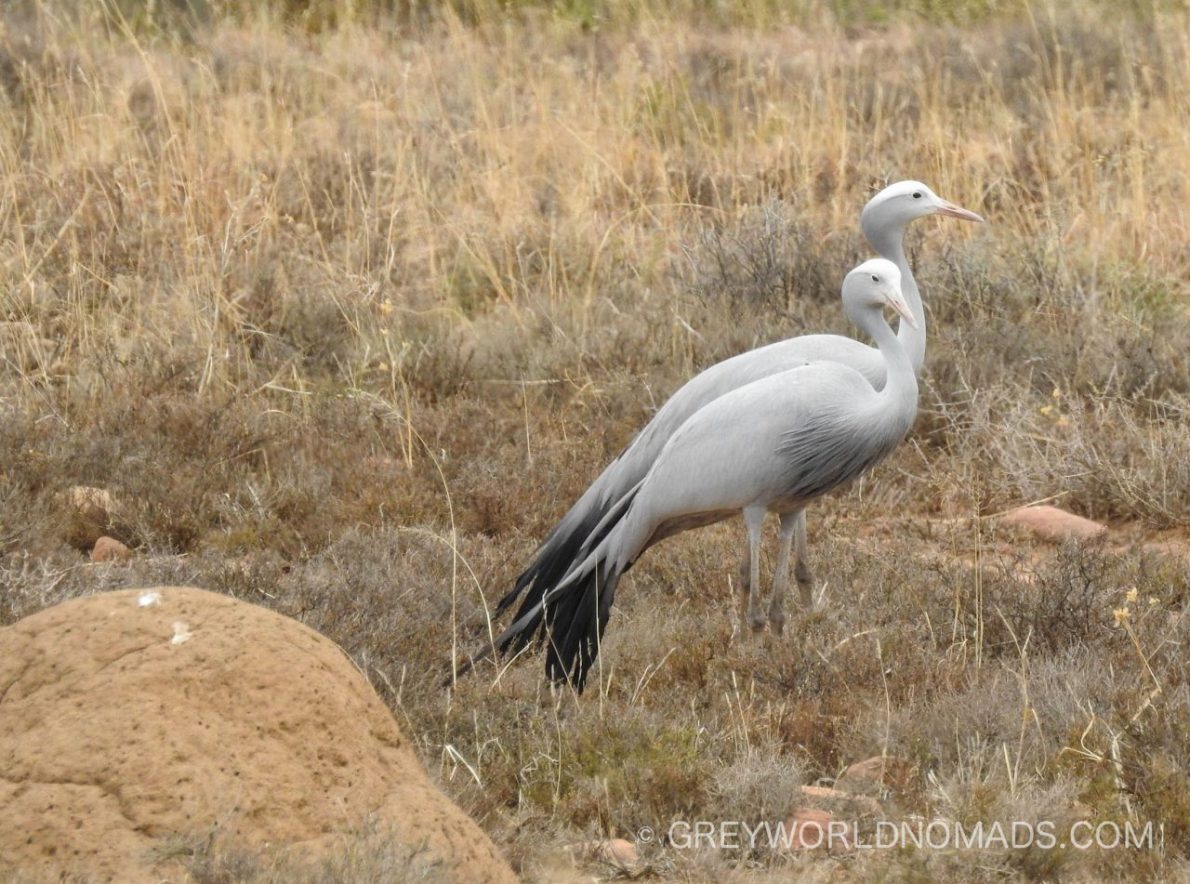 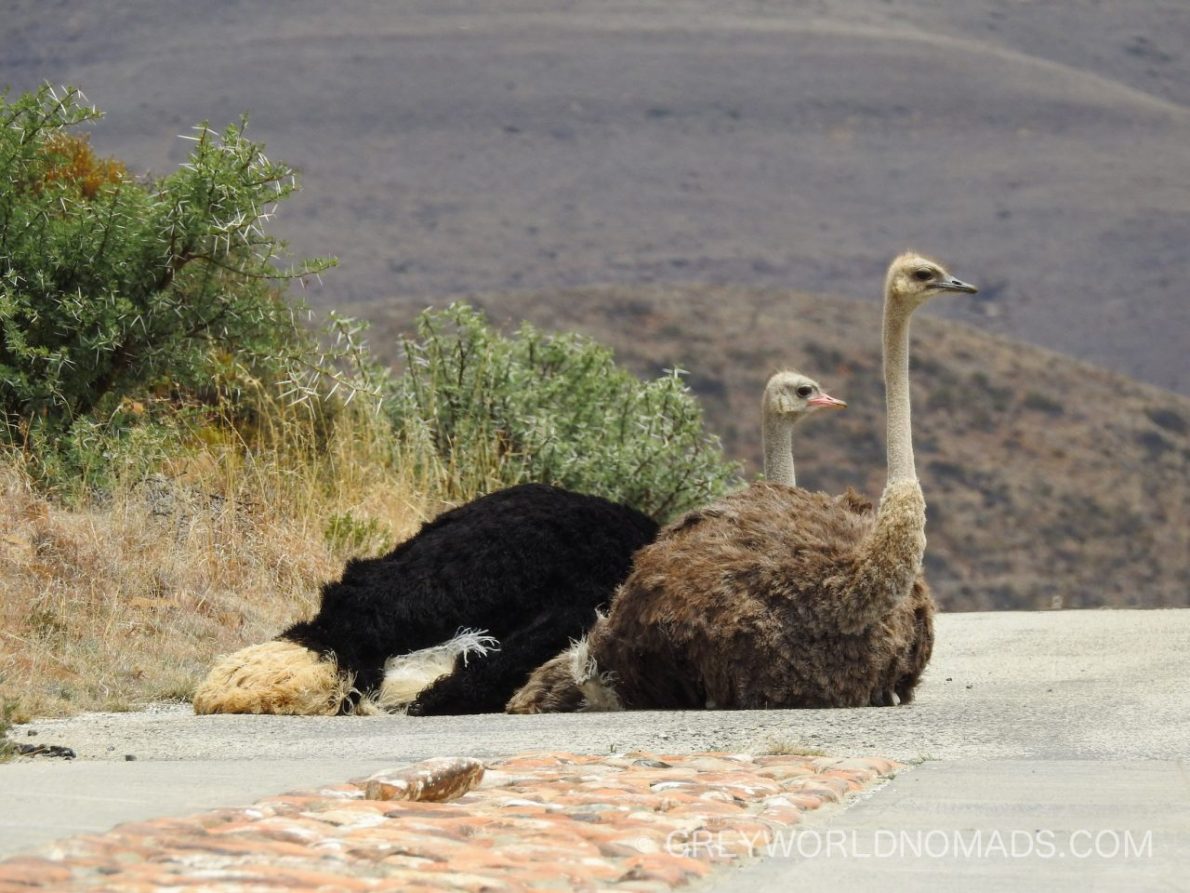 Mountain Zebra National Park was founded in 1937 with originally 1712 hectares of land, thanks to farmers near Cradock to conserve the small herds of the endangered Cape Mountain Zebra, which still survived in the area. The numbers grew up to over 750 mountain zebras in the last years and through the purchase of nine surrounding farms the park expanded to 28’412 hectares which size allowed to re-introduce black rhino, buffalo, cheetah, brown hyena and lions. 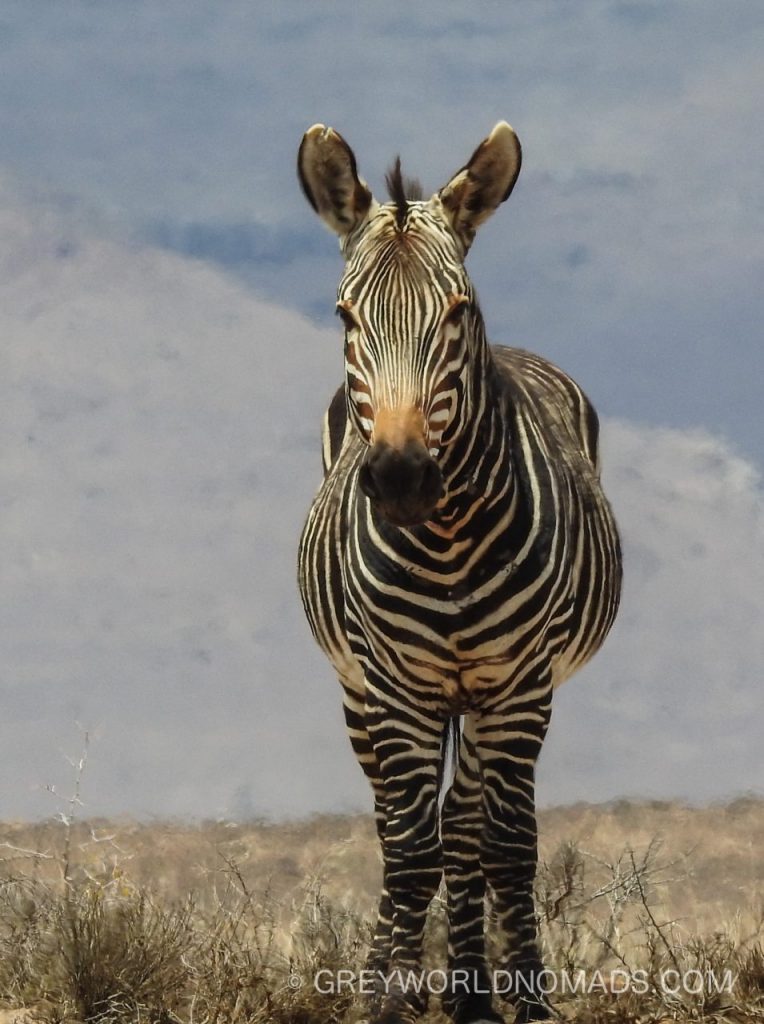 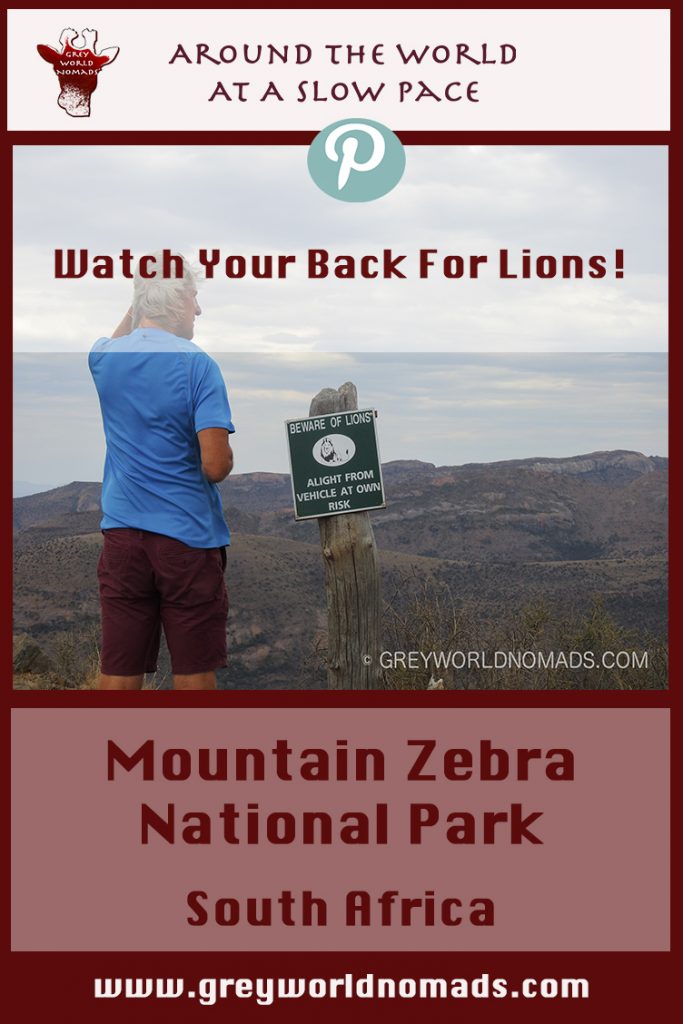 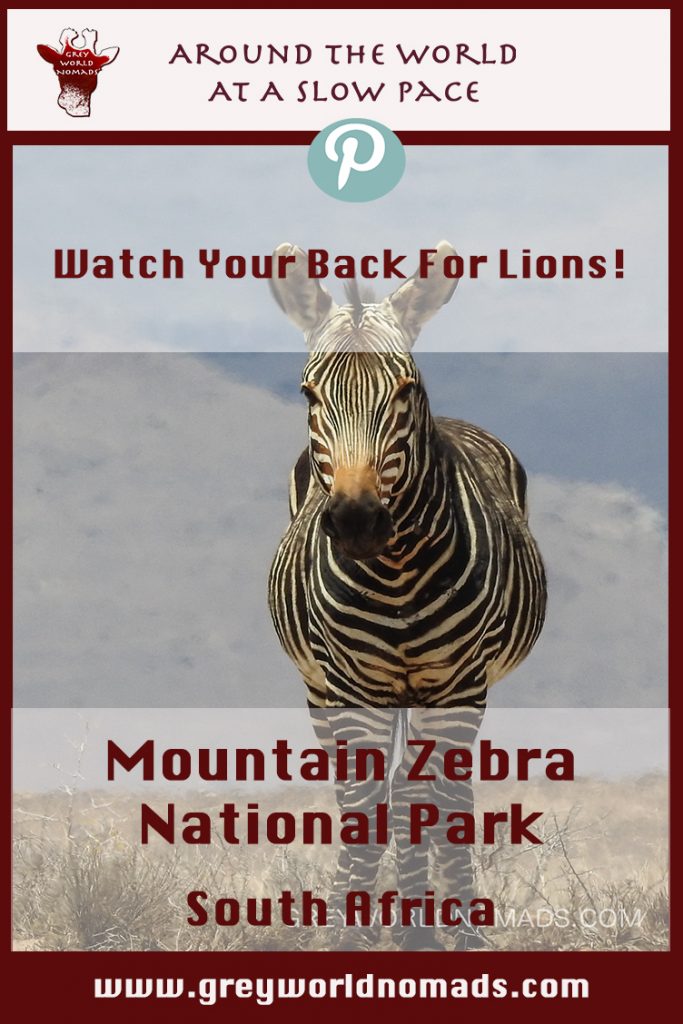