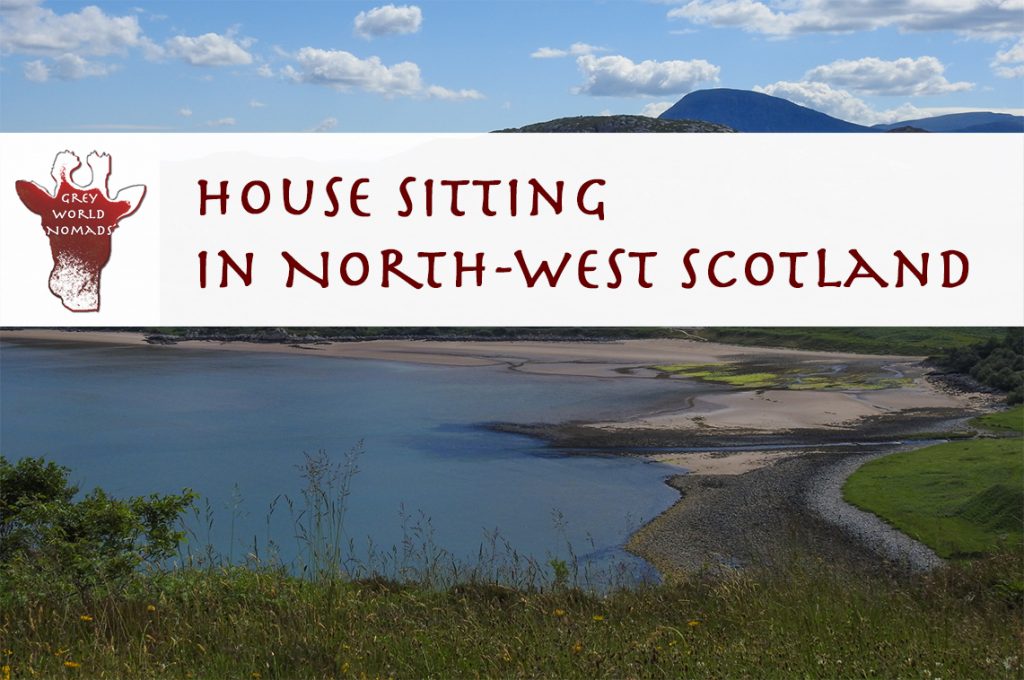 Our second last house sit surprised us with probably the most beautiful place we’d been of all our house sits in the United Kingdom of the last half year.

We lost our heart to Scotland anyway but this was something else!
We drove from Poolewe towards Aultbea along the main road from where we had the best views of the Loch and the low-lying Isle of Ewe.  The village of Aultbea appeared at the bottom of the descending narrow curving road, set picturesquely in front of rolling coastal green hills with grazing sheep. Only a small little town of white houses widely stretched along the shore with only a small shop, one church, and a tiny harbor to mark its center.

We met the house owners of our coming up house sit in the ‘ Perfume Studio’ about a mile from Aultbea in Mellon Charles to have a cup of tea and taking in the most stunning coastal view. Beside the café was a gift shop with perfumes, fragrances, skin creams, toiletries and soaps which made for the odd name of a café house in the sticks.

We went with their dogs to the small beach just in front to get to know them and to introduce Vlou, our traveling Beagle. On first sight, we were quite intimidated by one of their dogs called BJ. The male Staffordshire Terrier-mixed breed went off to stand over Vlou’s neck with his big muscular body and huge head in a way that dogs do when they want to dominate another.
Luckily Vlou ignored him entirely even when the quirky Patterdale Terrier lady, Suma,  joined in to subdue him. Subsequently, BJ lost interest in Vlou and Suma started to challenge both to a play which relaxed the situation immediately. We all sighed of relieve. Despite that we know that Vlou is extremely laid back with any dogs, even dominating once, you still can’t predict the situation.

We drove back to ‘our’ house for the next three weeks which was a lovely abode in mid of a flowering garden. We stayed another day together with the owners which prepared their camper van to head off to a wedding in England and some detours. Plenty of time to explore the surroundings of Wester Ross in the beautiful north-west of Scotland.
There were more worrying times in Aultbea for a short while during the Second World War. At a viewpoint just north of Cove stand concrete pillboxes and gun emplacements – the forlorn remains of a wartime defensive site. The North Atlantic convoy assembled in the sheltered waters of Loch Ewe, and an anti-submarine boom was stretched across its mouth.

Today, though, there couldn’t probably be a more peaceful place as boats for sea-angling may roam Loch Ewe for haddock, coalfish, cod, and pollack. But the villages which once made their living from the sea are now small tourist resorts and good bases for sports fishing, hill-walking and touring.
Although the coast of Wester Ross is on the same latitude as Siberia and Hudson Bay, the North Atlantic Drift softens the blast of the prevailing winds. If the weather is good in summer, several small bays along the shore invite for safe bathing.  Even subtropical plants and exotic trees flourish in gardens near the sea. See our post about Inverewe Garden which is situated on a peninsula in the neighboring town of Poolewe.

The River Ewe bounds through the village and divides the cluster of stone houses which form Poolewe. It stands on a narrow neck of land between Loch Maree and Loch Ewe. From here there is a scenic, not too strenuous 9km circle walk along the river Ewe with a glimpse on Loch Maree around Loch a’ Mhill Dhuibh in the most beautiful setting.

Gairloch stands at the head of Loch Gairloch, with the sheltered bays at Shieldaig and Badachro to the south, the sandy beaches around Rubha Reidh to the north and magnificent views westward across The Minch to Skye. The village has a quarter-mile curve of safe and sandy beach, where windsurfing and sailing are popular. We found one of the most beautiful bookshops with café in this little town, the Mountain Coffee Gairloch. We just had to come back for the crumbled plum cake with hot chocolate and marshmallows!

We walked along the string of whitewashed stone cottages that stretch either side of the pier and sat eventually down on a bench enjoying a soft ice cream in the rare sun looking out across Loch Broom, the longest sea loch in the north-west Highlands. Life is good!

The herring fishing industry flourished in Loch Broom since the 16th century for about 100 years. The fishermen’s cottages along Shore Street, the Arch Inn and the old herring-curing factory which now houses a tiny museum are testimonies of that time.

Ullapool has flourished despite the collapse of the herring industry. Its attractions now include sea-angling for whiting and skate, and game fishing for salmon and trout in the Ullapool River and the nearby Lochs. But you can also take a boat trip and visit the Summer Isles.  A ferry crosses Loch Broom to Allt na h-Airbhe; and the Ullapool-Stornoway ferry service links the port to Lewis in the Outer Hebrides.

Rocky crags and steel-grey streams tumble down towards the Loch’s southern shore from the heights of An Teallach – the ‘forge’. The mountain is so called after the curls of smoke-like mist which permanently wreathe its summit ridge.

Viewed at its best from Gruinard Hill, the shore of Gruinard Bay is indented with pink sandy coves formed of red sandstone. These make it one of the most beautiful bays on the west coast. There is a parking with access to the bay. The Beach is great to walk the dogs as it is fenced off to the street. We saw deer peacefully browsing in the thicket close to the beach, not much worried about us and the dogs at all.

Not on the tourist route but our personal favorite sandy shore in the region is Inverasdale beach. There is a campground with spectacular views and two beaches separated by a little peninsula in between.

View of the Isle of Ewe