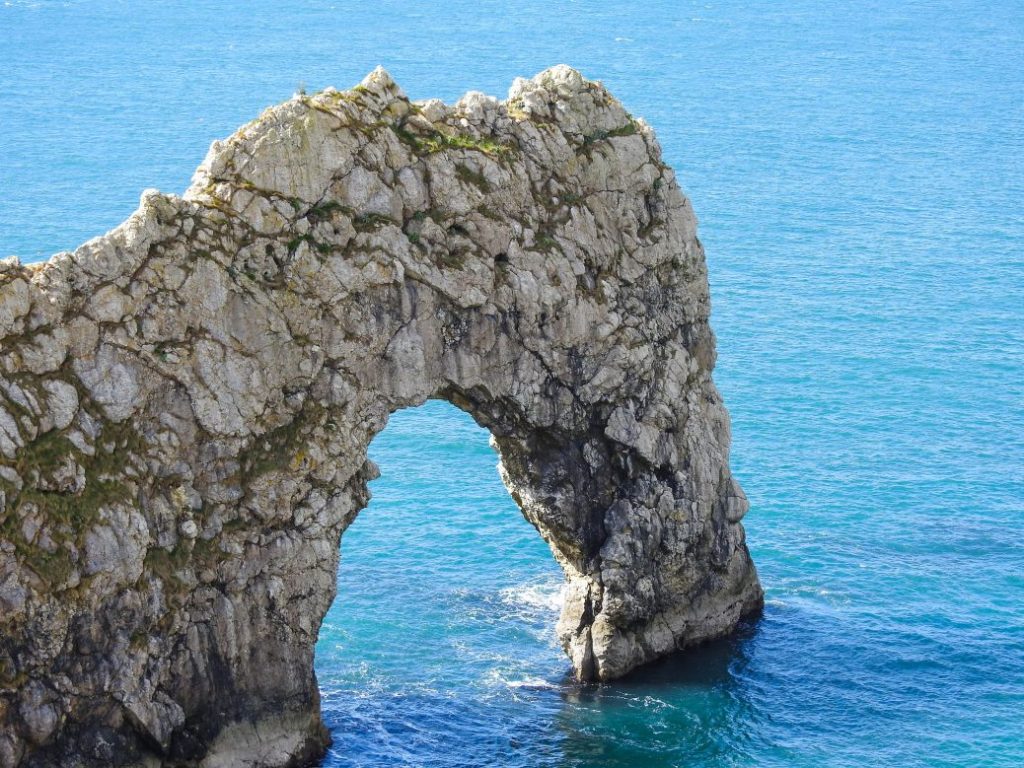 The Jurassic Coast Of Southern England

Share
Pin
Tweet
Share
From our house sit in the county of Hampshire we drove about 1 1/2 hours west to Lulworth which forms part of the Dorset and East Devon World Heritage Site popularly known as the Jurassic Coast, where rocks represent 185 million years of the Earth’s History from the Triassic, Jurassic and Cretaceous time periods. Fossils in these cliffs give evidence of a third of the time of complex life on Earth.

Durdle Door is one of the most popular destinations in Britain and draws visitors from all over the world. We headed immediately down to the beach to give the dogs some lead-free time and had a good walk in the stunning scenery along the foot of the white chalk cliffs over the pebbled unspoiled beach with a picnic in a sheltered spot all alone. 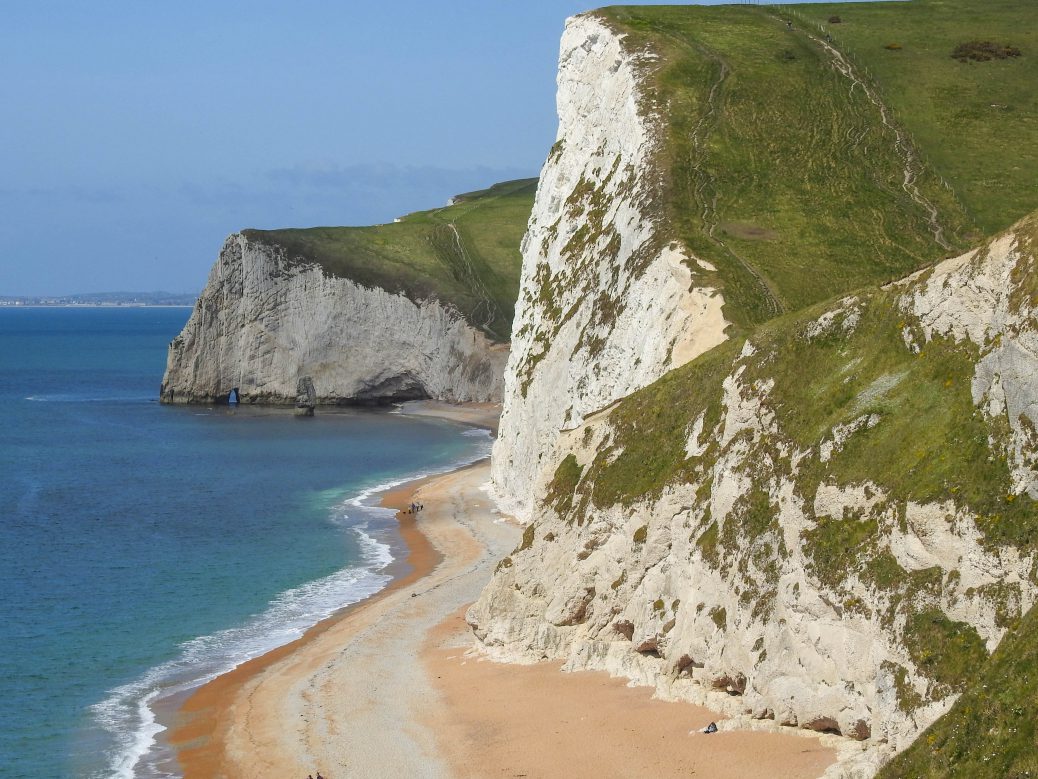 Dorset’s chalk downs meet the English Channel in a series of high, white cliffs, where the sea’s constant assault has cut the softer rocks around the harder Portland stone into such magnificent natural sculptures as the great arch of Durdle Door. 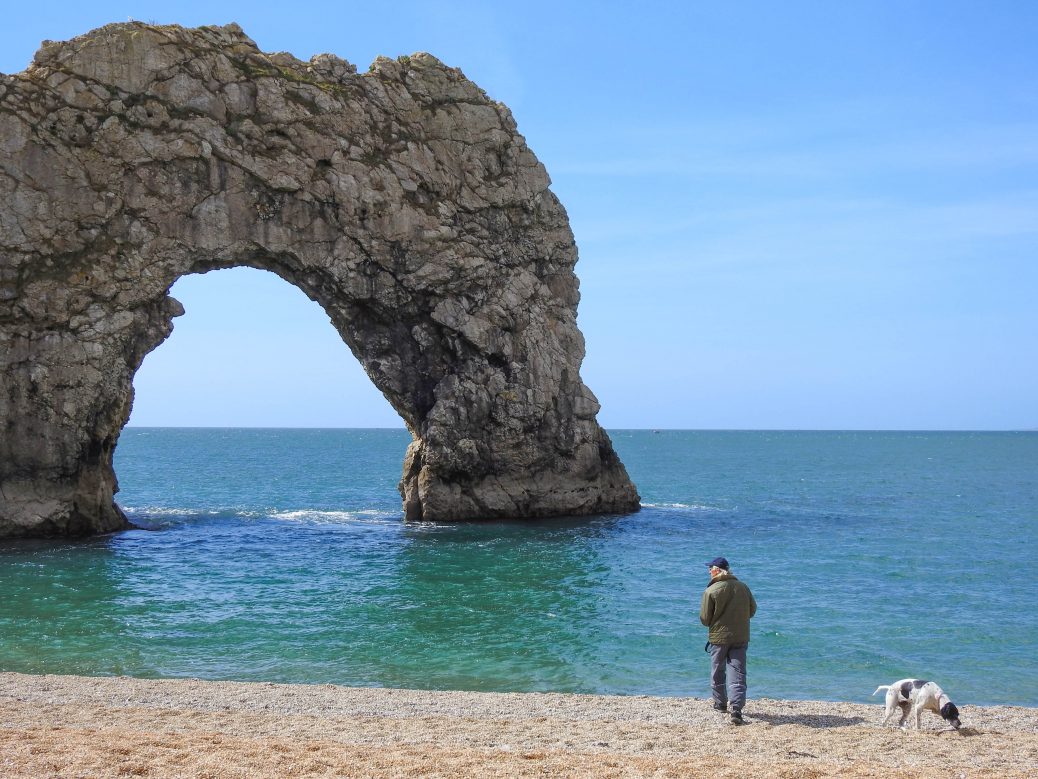 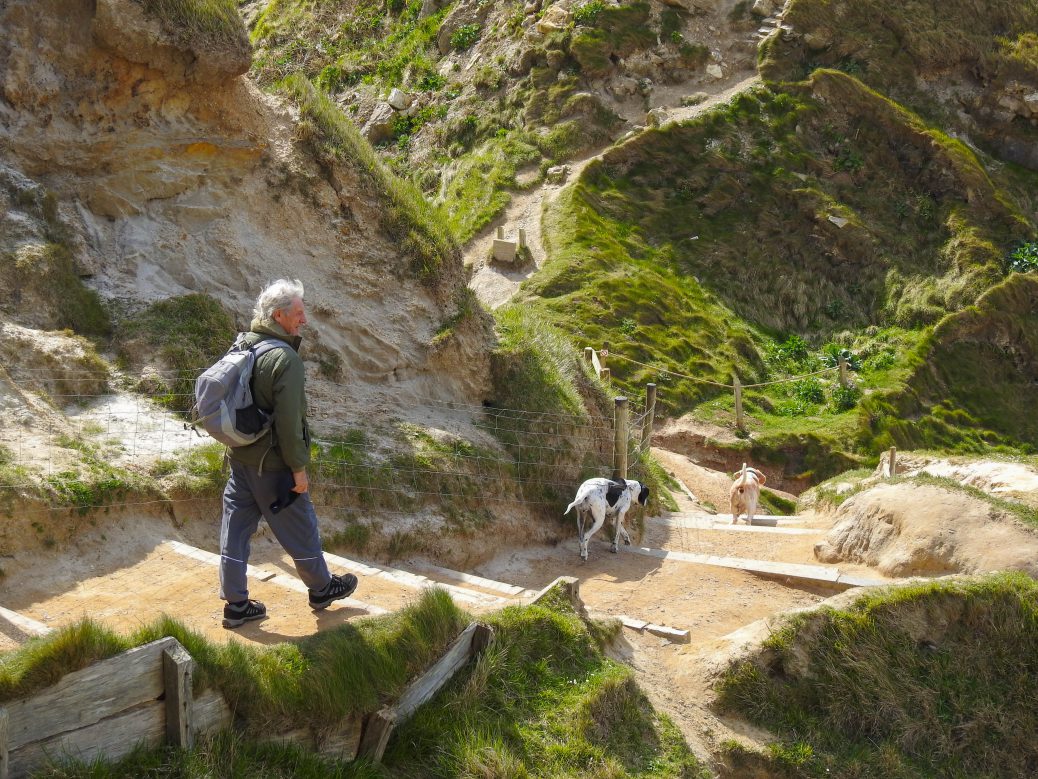 Walk down to the Beach

This spectacular natural arch ranks high among Britain’s coastal wonders. From the nearest car park it’s only a five minutes walk. The final approach to the arch is flanked by steep flights of steps which run down to shingle coves whose crystal-clear water makes them ideal for divers.

To the west at Bat’s Head, there is a wave-carved ‘mousehole’ – the humble start of another arch. 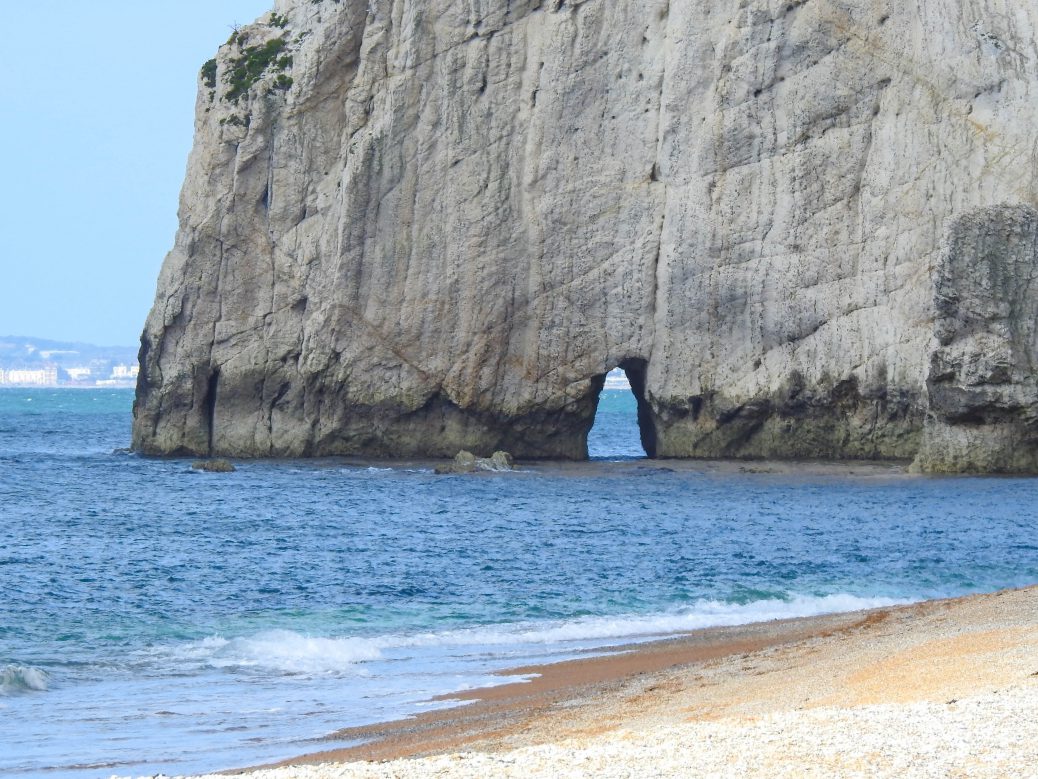 A good walk for dogs, which are allowed on the beaches at Durdle Door. More dog-friendly beaches and pubs you find on  Top Dog Walks on the South West Coast Path.

Vlou, our traveling Beagle, and Maggie, the pointer from our house- and dog sit in Swanmore, enjoyed their beach-walk thoroughly!

Wit 630 miles the longest National Trail of the country, the South West Coast Path passes along this section of dramatic coastline. From the path, you can take in tremendous views over the chalk stacks and arches. Preferably you choose to walk in late Spring and early summer when the limestone grassland beside the path is full of flowers and butterflies.

A very popular beach of sand and fine pebbles on the east side of Durdle Door is the Man O’ War and the Door shelter. In the summer it provides safe bathing in shallow water.

The parking at Lulworth Cove was much more crowded than the one above Durdle Door. However, you can walk the coastal path from Durdle Door to Lulworth Cove if you want to combine the pleasure of conquering the path above the high cliffs which connect the two sites of outstanding beauty with the use of not having to look for another parking spot (and pay for it).

The cliffs at Lulworth Cove form a natural amphitheater of crumbling chalk around an oyster-shaped cove which illustrates the constant battle between land and sea. The bay was formed by waves attacking joints in the Portland stone, creating arches and finally breaking right through to attack and excavate the softer clay behind the rock. 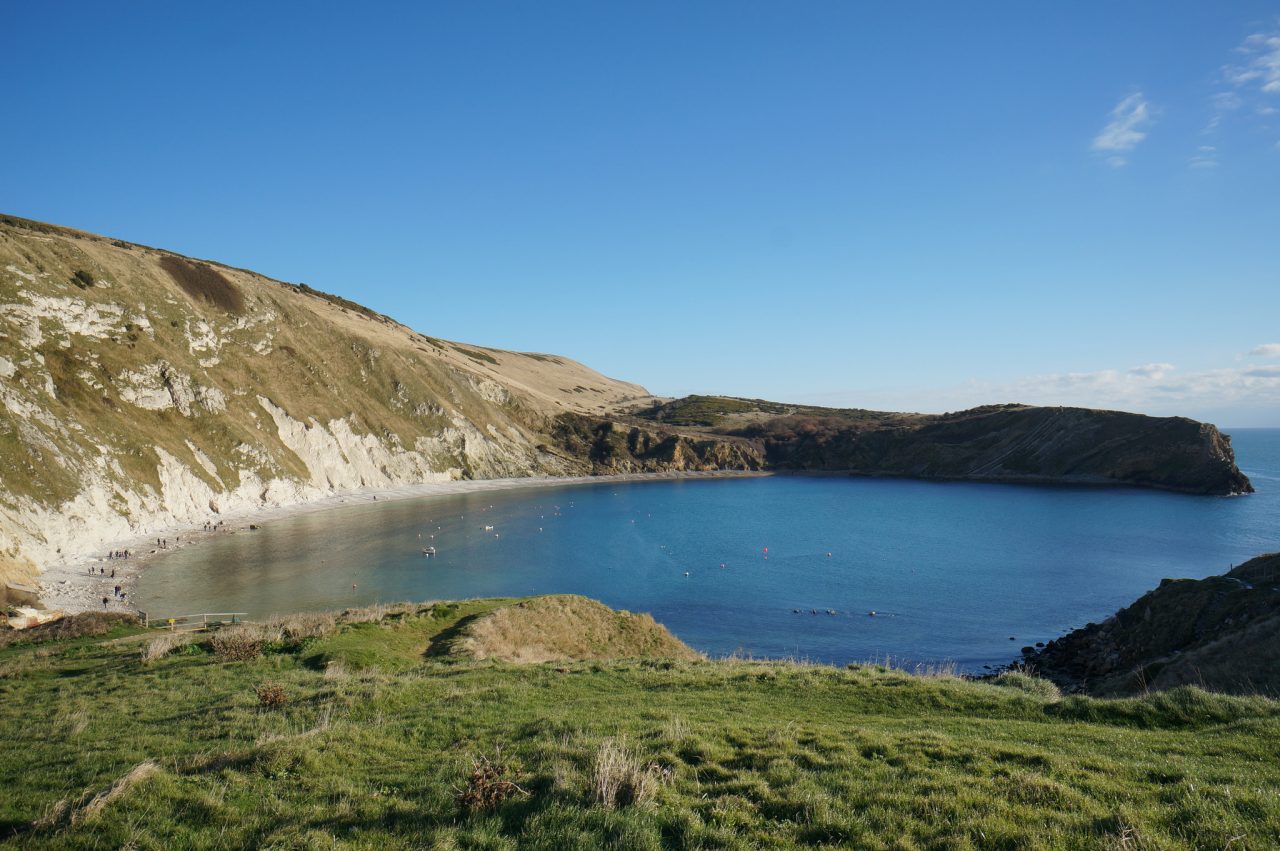 Lulworth Cove is part of the Lulworth Estate. You can be sure in England that if you are on a stunning private property there will be a castle. And so it is in Lulworth, too. Just a few minutes drive from the coast inwards to the countryside you find Lulworth Castle.

Lulworth Castle was built in the early 17th Century as a hunting lodge to entertain hunting parties for the King and Court. Unfortunately, a fire in 1929 gutted the buildings, to be reopened only two decades ago in 1998 by English Heritage. The castle is open to public and dogs are allowed in the woodlands and gardens around it.
- Swipe left/right to see more

I dwell on the shoreline so warm and so sheltered,
I’m drawn to the archway that leads to the sea,
Lit by the rays of the sunlight that’s shining,
A way to the ocean a way to be free.
A frame to the beauty that lies far beyond it,
That reaches to heaven and God’s loving hand.

Such peace I do find in this haven of beauty,
The crests seem to glisten like diamonds that shine,
Moving in motion they’re rising and falling,
Casting their spell on the waters divine.
And as I gaze in awe on such wonderful sights,
My heart does belong to this magical land.

Sapphire and placid the sea is so calming,
So gentle the waves on the shingle lined shore,
The sound of seagulls that soar high above me,
Over the coast and towards Durdle Door.
Sculptured by time and a gate to the future,
But dreams always end as the stones turn to sand.

More information about the Jurassic Coast: