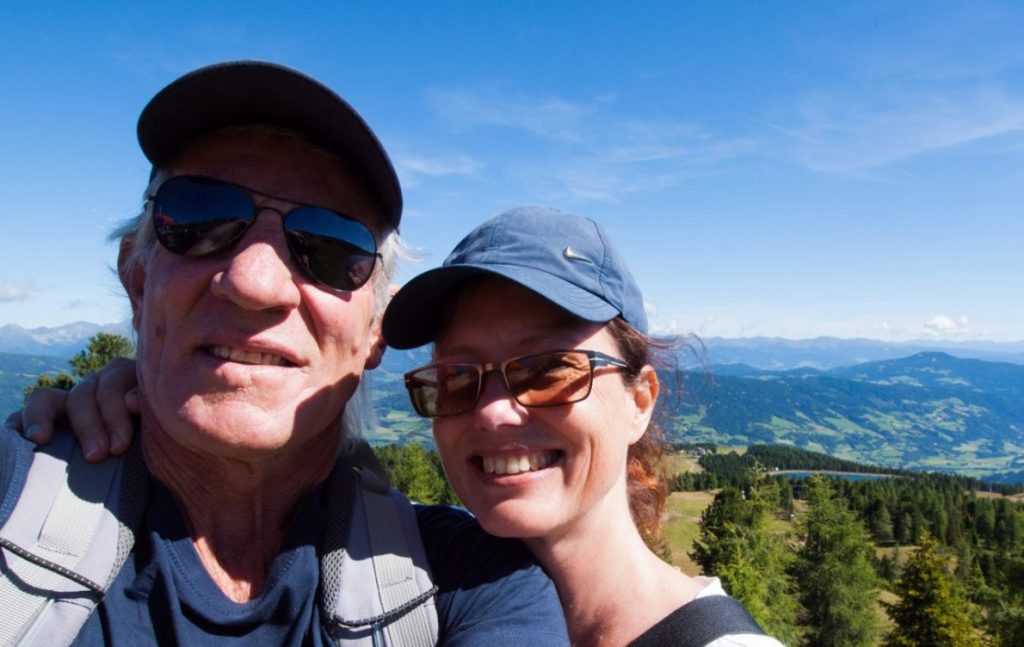 The Styrian Town Murau In Austria Surprises All Over

English  |   Deutsch
After a breathtaking drive through the well-wooded, alluring alps in Austria we arrived at a place where I instantly felt at home. The Styrian medieval town of Murau welcomed us with an evening glow over its distinctive castle which overlooks the colorful townhouses along the river Mur.
Murau is nestled between gentle shaped Styrian peaks reaching heights of over 2000 meters. Meanwhile, Murau lies on a healthy 829 meters elevation – no smog, no pollution teasing your lungs in the pristine mountain air, only the smell of cow dung, pollen and the ring of church or cow-bells may disturb you if anything.

Bridge over the Mur

A glimpse of Murau’s history

There are two people which stick in my mind because of their most in-compliant lives and influence over Murau’s stream of history.  First of all – as a woman myself –  I have to mention Anna Neumann living from 1535 till 1623 (88 years!) in Murau which is impressive on its own.  Even more sweeping is that she survived two witchcraft trials and five husbands. A life in the medieval era like the US actress Liz Taylor in more modern times! (although I don`t think Liz was ever tried for witchcraft). Of course, there are other more important achievements for Murau – but not as juicy as this.

Now, I promised you another cool figure of Murau – that’s Ulrich von Liechtenstein. In 1227 the minstrel-poet went dressed in women’s clothes on a poetry-tournament journey that took him as far as Venice and Bohemia.  Dressed as a woman – the goddess Venus – he taught his opponents how to love and appreciate women. The same talented actor founded Murau in 1250!

A pinch of Murau’s myths

Murau likes their gods and goddesses. On a rock in the river Mur thrones Murna, the water-goddess just at the point where the stream turns into a river. As symbols of energy, she bears two lightning streaks. Garlands of hops stand for conservation.

But not enough of a goddess as there is also …

the queen of cats – a sculpture with a cat-mask with two heads – is situated on the river walk. She represents a legend of cats shape-shifting while descending from the castle into the town.

Getting active in and around District Murau

The ridges and valleys in the Murau-Kreischberg and Frauenalpe region offer abundant hiking trails in the summer and invite visitors in the winter to explore the ski and cross-country slopes.

Even I as an average sporty person would ride a bicycle through the beautiful green valley as the bicycle path is leveled along the Mur river providing a pleasant excursion. I opted for walks though so as to be able to take the dogs with.

Cycling along the river Mur

If it’s white-water rafting, serious mountaineering or mountain biking; also Adrenalin seeking sports enthusiasts have lots fun in the Styrian Alps.
We love to take it a bit easier though and climbed the Kreischberg most comfortably (and lazy) by cable car. In the Summertime the cable car runs on Sundays and Wednesdays only.

From the terminus, we hiked about 1 1/2 hours up to the top of 1738 meters and were awarded astonishing views over the valley of the District Murau. After that, we had the agony of choice between quaint restaurants offering local specialties and of course – Murauer beer for the thirsty hikers.

Young and old hiking on Kreischberg

Stunning views on the Kreischberg

Hiking in the Murau – Kreischberg region

Peaks of snow in the summer in Austria

View over the dam on the Kreischberg

Enjoying the sun and views in the Murau – Kreischberg region

Murauer beer is a local product proudly sold in all restaurants far and wide over the boundaries of the District Murau. The factory lies idyllically at the entrance to the old town of Murau along the banks of the river Mur.

Murauer Beer sold all over Austria

Being mid-summer during our three weeks stay in Murau we had the advantage of experiencing plenty of festivals and were able to immerse into the ‘Lederhosen’- culture, folk music with accordion and enthusiastic brass bands.

Maibaumumschneiden in St. Lorenzen ob Murau – ladies in Lederhosen and with cell phone

One of the famous and impressive festivals in Murau is the Samson-Umzug which we were lucky to attend during our stay. It’s a heathen tradition and remnant of Slavic mythology. The overly big figure of Samson represented a mighty god which was able to awaken springtime.There is a whole tradition around Samson during the festival which the Murau citizens avidly celebrate every year on the 15th of August with numerous multinational spectators.

The giant Samson moving to the crowd

Most excitedly we relished a nostalgic ride with an original, more than a century old steam train. Every Tuesday and Thursday it runs from the unique Murau station to the town of Lungau in the federal state of Salzburg in about 1 1/2 hours – of course, accompanied by the accordion music of a young Austrian in Lederhosen!

So … have you ever been in Styria, Austria? Or in other parts of Austria? We’d love to read your comment. You can add it here below this post.

Up to the next friendly Austrian town!